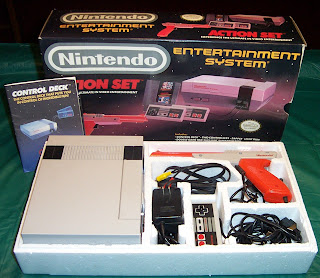 Like the awesome oven described previously, opportunities for free stuff are all around you. For example, last Spring I was driving home from work when my hawk-like eye caught the glint of what appeared to be a Nintendo 64 box. It was sitting out at the trash! Complete NES 64 systems are highly prized by "gamers", particularly if they come complete in the original box. Like a good garbage picker, I doubled back to make sure it was a Nintendo box. It sure enough was! I quickly veered my car over to the curb like a New York cabbie and jumped out to grab it. (It's important to be quick when picking trash in your hometown...you don’t want to be spotted and have the neighbors gossiping about you!)

Upon arriving back home at my Bat Cave, I discovered the Nintendo box was empty. But it still contained the two-piece styrofoam packing that protects the system. In this business you must adapt to your conditions, so I quickly retrieved a Nintendo system I had socked aside. I paid a mere $3.00 for it without the box. So I matched the system with my garbage picked box and created a "complete" system. I posted it on Ebay and it sold in it's "new" box for $49. This was a lot more money then I would have earned without a box!

Some additional hints on selling game systems; the more games you can include with the system, the more bids you will receive. Also, if you don’t have the system but do have the box, there is a market for the empty boxes. Many “gamers” and those Used Game stores are always looking for boxes to make a complete set and re-sell. Lastly, if you buy a new game system for the kids, DON'T throw the box away-save it for when you re-sell the system.