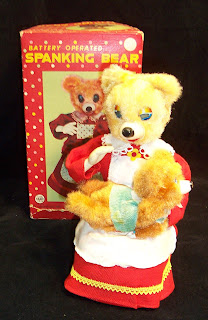 A few blogs ago, I talked about finding a yard sale with toys from my childhood era (Sixties). This sale produced a huge list of items for me which I sold off during the Fall months. One of the last items that I sold on Ebay was a mechanical tin toy featuring a momma bear spanking her baby bear. When I found it sitting on the table I thought it was just a plush doll in it's original box. Not being a doll expert, I bought it for no other reason then the fact that it was still in the box. The price was ridiculous-one dollar! So I brought momma and baby bear home and forgot about them. My plan was to post it during the slow winter months, basically one of those "I'll get around to it" items. Some weeks back I pulled it off the shelf and took a good hard look at it. I was pleasantly surprised! This wasn't a doll, it was a famous Japanese mechanical tin toy! Researching it further, I found it was made by Linemar toys and considered one of the more highly collected toys due to it's politically incorrect action-spanking a child! The toy jogged my memory too, I am almost positive it was once featured on Antiques Roadshow, a mark of approval if there ever was one! To top it off, the toy has been listed on some antique toy websites for upwards of $500!

While examining the toy closely for my item description I found one damning flaw. Although it's condition was near-new, it didn't work...Dang the luck! Looking inside the battery compartment, I noted the inner compartment wall was separated, making it impossible for the batteries to make contact. I considered paying to have it professionally repaired to maximize my profit, but I don't have the time to find a trusted toy repair shop. So I decided to sell "As-is" with a complete description of it's non-working condition. Just to make sure lots of eyeballs had a chance to find spanking bear, I spent the extra 45 cents and posted for a full ten days.

The results were pretty impressive. At it's close the bear had over twenty people "watching". While I didn't see $500, she sold for $91 bucks! A nice yard sale return on a one dollar investment! If only every yard sale had a "spanking bear" waiting to be discovered!
Pin It now!
Posted by Dude ! at 10:17 AM