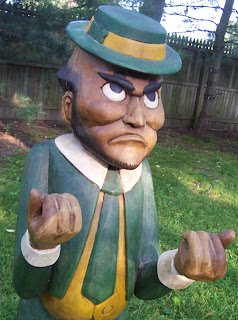 So last year I was at a community yard sale in the parking lot of the local supermarket. As I walked along on that warm Spring day, I encountered a first for me...a life size wood carved leprechaun! He should look familiar if you are a football fan. He is the official mascot of Notre Dame University, "The Fighting Irish Leprechaun". But I just called him Lucky! This guy was huge, over five feet tall and all hand carved. The owner of the supermarket had him positioned by the deli counter inside his store. After the supermarket received a face lift, old Lucky was put up for sale at the annual yard sale.

My timing was perfect, a young stock clerk had just hauled him outside to sell. I asked the kid how much for the big guy. The kid, apparently not checking with his boss first said, "I dunno, twenty five?" I actually hesitated for a brief moment due to his bulky size. Who would buy him and how would I ship him? My moment of doubt quickly vanished and I came to my senses. I thought for twenty five, if I couldn't sell him I could always attach the mailbox to him and put him out on the curb! I peeled off the cash and had the stock clerk help me load him in my truck. As I left another buyer asked me how much I paid for him. When I told him the crazy-low price he grimaced and looked pained. He was clearly bummed that he missed out on this deal. (I've been there buddy, but it was just my day to catch the bear!)

When I got Lucky into the house my young son nearly freaked, "What the heck is that?" he shrieked. I explained he was basically like the old Wooden Indians that sat out in front of Cigar stores. He looked at him as if a weird stranger had just entered our house. I can't blame the little guy for being apprehensive about Lucky, he had a constant scowl on his face and looked pretty mean. Once Lucky was in the house he went no further then the family room off my garage. I didn't want to tempt a bad back moving him any further. So Lucky stayed in the family room for weeks keeping an eye over my son as he watched Sponge Bob. He got to be a regular member of the family with his constant looming presence. Needless to say my wife was not thrilled. Her daily question to me was, "When are you going to sell that thing?" She was not bonding with old Lucky!

I decided the big guy was best sold on Ebay over Craigslist. I wanted as many people to see him as possible, especially Notre Dame fans. I originally started him with a "Buy it Now" price of $300. Due to his size there would be no shipping, it was pick-up only. I was pretty confident that a Fighting Irish football fan or just a good Irishman would really want this fella as a conversation piece.

It took about a month but I finally found a buyer for Lucky. Two hard-core Norte Dame fans who co-owned a vacation Condo near the University. The guys told me they headed up to Notre Dame on football weekends to root for the Irish. Lucky was going to their condo and would be there to welcome these super fans every weekend! They paid me $225 for Lucky. A good deal for the buyers and a two hundred dollar profit for me. Could I have sold him for more? Probably, but because he was so unique it would have taken time to find the right buyer willing to pay a higher price. With an offer of $225, I decided it was time for Lucky to move out of my house. So sonny boy and I transported the big guy to a meeting point near the turnpike exit. (I charged them an extra $20 for partially transporting Lucky) When the buyers drove up you never saw two happier guys. They gently slid Lucky into their SUV like he was a new born baby. I was glad I found Lucky a good home !

As we headed back, my son admitted to me that he was going to miss good old Lucky. I took the moment to teach him a little lesson about Dad's hobby. I began, " You see son, our house is sort of like animal shelter...but for stuff. Dad brings stuff home to stay with us for a short while. We get to enjoy the stuff, play with it and admire it. But at some point the stuff has to move on to their rightful owner." He looked at me skeptically, not sure if I was pulling his leg or being serious. (A little of both actually) I tried to end on an upbeat note,"But don't worry, even though Lucky is gone, you never know what new cool stuff Dad will bring home for you to enjoy!"

It's nice when I can combine Ebay flipping with good parenting.
Pin It now!
Posted by Dude ! at 5:48 PM 2 comments 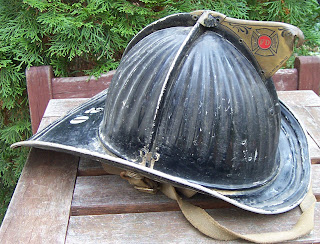 Saturdays are the primary day for most people to host a yard sale. This is followed by those people who like to get a jump on the weekend and run an "early bird" Friday yard sale. The Sunday yard sale comes in third place: rare but still a chance for you to find some treasures.

One late Sunday morning, I was heading back from the supermarket and turned down a road I don't normally take. It must have been some crazy happenstance, because I spotted a sign for a rare Sunday yard sale! In my neck of the woods finding a Sunday yard sale is like witnessing a celestial comet, very rare and sporadic! I followed the signs with low expectations; it was late in the morning and a Sunday to boot. When you do see a Sunday sale, it's usually a continuation from Saturday with nothing left but the junk. I pulled up and observed an old timer presiding over his treasures. It looked like he threw together a quickie Sunday morning sale just to clear out some junk in his garage. Walking around his blankets full of dusty old tools and household items, I noted a classic fireman's helmet. The kind you see in the movies; made of black metal with the pumpkin-style ridges and the famous elongated back brim (to shed water). It was a little dirty and had some scratches but that just gave it character. It was also missing it's front fire department brass badge, but I couldn't complain, I found it by pure happenstance! I chatted it up with the old timer, acting very casual about the fireman's helmet. “How much?" I finally asked pointing to the helmet. He was a spry old timer and quickly shot back with "Gimmee $20". " How's about $15.00?" I countered. He agreed and I scooped up the helmet and headed home.

Doing some Internet research, I happily learned that firefighters equipment is big-time collectible. It makes sense: lots of folks are involved in volunteer fire departments all across the country. Not to mention the full-time fire fighters in most cities. Many of them are out trolling Ebay for their personal collections with vintage helmets being a prized collectible piece. My particular helmet happened to be made sometime in the thirties or forties by a well-known fire fighter's apparatus manufacture. Based upon my research, I was feeling pretty good about my Sunday morning acquisition. I listed it on Ebay and saw a huge amount of interest. Bidders bombarded me with questions and there were plenty of watchers. The auction closed with a high bid of $85...an outstanding price for a rare Sunday find!
Pin It now!
Posted by Dude ! at 6:19 PM 0 comments

Nice picnic bench, maybe I'll buy...hey, who's truck is that ? 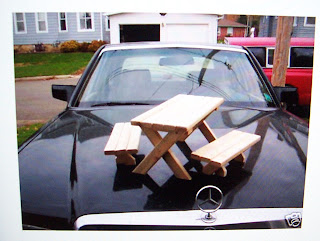 While researching Ebay prices recently, I stumbled across this odd looking photo. It illustrates what NOT to do when you are attempting to market your Ebay merchandise. In this awkward shot, the little picnic bench is for sale. But wait a minute, it's being displayed on a Mercedes Benz. Is the Benz hood ornament for sale?! Whose red truck is that in the background? And why is that garage door open across the street? There is a lot going on here! A photo like this distracts your potential buyer and doesn't look professional. This seller looks like they are "winging" it. As a potential buyer, would you want to buy something on Ebay displayed on a hood of a car? That's fine if you are buying at a yard sale, but this is Ebay ...you are competing against big retail operations! If you want to see the highest return on your items, take the best professional photo possible.

There are times when you need to take an outdoor photo of your item. It may look better in natural light or it's too big to display on a table inside the house, ect. My Disney Castle seen a few blogs ago was taken outside for both reasons cited above. The background greenery in that photo did not draw away your attention from the castle and may have been an improvement over a standard indoor photo. However, this little table would have been better suited taken indoors with no distracting background. Secondly, judge the actual percentage of space the picnic table takes up in the photo, maybe 25 percent? It's an incredible waste of photo space and prevents your buyer from getting a good close look at your item. Get in nice and close and let folks see what you are selling!

I purchased a small photography tent on Ebay that came with four different color curtains you can Velcro to the back of the tent. It makes for a nice professional picture with minimal distractions. But you don't need to spend lots of money to have a decent background. If you are taking your photos on your kitchen table or couch, throw something like a blanket or sheet behind it. Pick a color that contrasts nicely with the item. This will focus the buyer's eye on your item and not on the background like, say....an open garage door !

You made time to find and list your Ebay merchandise, take a few extra minutes to photograph it in the best light possible!
Pin It now!
Posted by Dude ! at 4:33 PM 0 comments