You're so crazy Rose ! 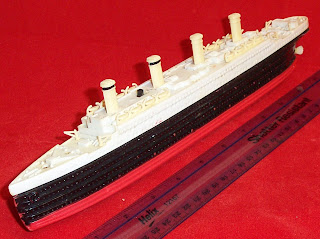 Remember in the movie Titanic when Rose jumps out of the lifeboat to rejoin Jack? As he pulls her back over the railing, he says in disbelief, "You're so crazy Rose, why did you do that?!" That's what I kept repeating to myself when I sold this little model of the doomed Titanic. This unassuming thing was all plastic and about eight inches from bow to stern. It even showed some chipped paint. Really nothing much to get excited about and easily overlooked. Just another poor little thrift store cast off. I paid 50 cents for it. But despite it's lowly appearance, I reasoned that there might be some Titanic collectors who may buy it. For the cost of two quarters I thought why not try it? Guess what the thing sold for? Would you believe thirty four dollars? After the auction closed I wanted to ask the buyer, "You're so crazy, why did you do that?"

Lest you think it was a fluke, I found another one months later and sold it for 30 bucks! But the larger point is this: when looking for inventory, keep in mind what's hot in popular culture at the moment. The Titanic movie was one of the top grossing movies of all time. People went nuts over that flick. It won best picture, the Celine Deon song was played on the radio constantly and it's movie spin-offs such as coffee books and posters were everywhere. Thanks to that movie a whole new generation of Titanic fans were created.

Would I have made $34 dollars on that plastic Titanic prior to the movie's release? Doubtful...it may not have received a single bid. But thanks to Titanic fever, lots of people were typing in the ship's name in their Ebay searches.

If you find one of these little plastic Titanic ships buy it and make a few bucks. Better yet, those "Twilight" movies are doing big box office, maybe look for vampire stuff in the thrift store? Just an idea.....
Pin It now!
Posted by Dude ! at 3:59 PM