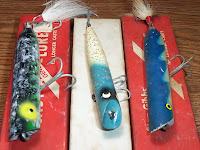 Here is another example of a garage sale find that kept on giving. I came across this old, rusty tackle box back in the Spring. Take it from me, if you see a tackle box filled with fishing gear and the price is right....buy it! This old rusty box had a bunch of lures, tackle, hooks and lots of other stuff. While it wasn't overflowing with gear, there was still plenty to sell.The owner told me it was his Dad's and it dated back to the 1950's. He was asking $20 but after a little negotiating, we agreed on $17. I took it home and inventoried the contents. I decided to go with my "bust it up" strategy. I made individual lots, reselling the smaller groups of tackle on Ebay to maximize my return. This is how my auctions played out:

I started with three large fishing lures. These netted me $19. After this first sale I was basically "even". In other words, I made my initial investment back plus two bucks. Now the remaining auctions would all be free money! Here was the payoff:

Last but not least, was the tackle box itself. It was big, old and had some rust. The gear left inside was basically the cast-off junk, nothing of great collectible value. I decided to sell this monster on Craigslist instead of Ebay. It's weight and bulk would really make it very expensive to ship, turning off potential bidders. That is the beauty of Craigslist, listings are free so you have nothing to lose by posting it. I listed the old rusty tackle box and got few nibbles. Finally after a few weeks a Dad contacted me saying he wanted to give his son an "old school" metal tackle box. I met Dad out on the highway and he gladly handed over $30 for the thing!

So adding up the final tally, I earned $96 from that old rusty tackle box. A nice "catch" at that garage sale!
Pin It now!
Posted by Dude ! at 3:52 PM