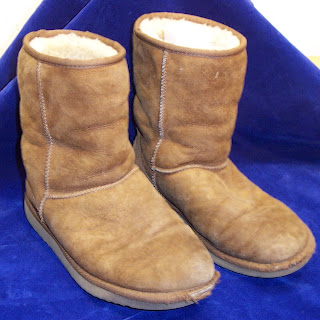 Once again, opportunities to acquire stuff to sell on Ebay can be found in the least expected places. Working around my house recently, I went to my garbage can to dump some junk. I opened the trash can lid and stumbled backward in disbelief! Laying on top of the trash were my daughter's Ugg boots! If you know anything about girl's fashion, you know Uggs are the hottest boots around. All the girls just gotta have these high end boots while their poor parent's pay through the nose for them. A new pair of Uggs will run you $150 or more. The boots I retrieved from the trash were a Christmas gift for my daughter only two years ago! I even have home video of her that Christmas morning, smiling and happy as she tried on her new Uggs! Now just over two years later, the boots were cast aside in the trash like those poor misfits toys from Rudolph the Red Nose Reindeer!

I was incredulous; sure they were old and worn but these were still Ugg boots! So I fished them out and with disapproving looks from both my daughter and wife, went right to my computer to research Uggs on Ebay. As I walked past her, my sweet but naive daughter wondered aloud, "Who's going to buy an old pair of beat-up Uggs?" Clearly, all my hard work selling on eBay has not made one iota of an impression on my princess! I modified one of my favorite movie lines to answer her question, "Dearest, if you post it, they will bid!" My daughter rolled her eyes and went back to concentrating on more important things, watching the latest episode of MTV's "Jersey Shore".

If you searched "Ugg Boots" on eBay right now you would find there are over 500 used pairs up for auction. Just like my daughter's boots, not all of them are in great shape. I believe in truth in advertising, so when I listed my daughter's Uggs I was straight up about their condition: soles...worn, toe caps...worn....insole....yep, worn too! I also posted a bunch of pictures, including two that showed a wear mark on the inside sole and fraying on the boot's toes. I didn't want the buyer to complain later that I wasn't up front. Just to make sure these boot would not come back to haunt me, I made it a "NO RETURN/AS-IS" auction. My description emphasized that while they were definitely worn, they were still real Uggs. With the Ebay world flooded with Ugg knock-offs, at least my buyer knew they were getting the real thing.

As the auction ticked along, the trash-bound Uggs had 81 "page views" and nine "watchers". I listed the boots for a starting bid of $9.99 and they quickly kicked up to $16 in only the first day. I was starting to feel vindicated! Nobody wants used, beat up Uggs?....please! When the auction closed I was completely beside myself, those beat up Uggs sold for a winning bid of $32 dollars! This was money that was almost thrown away. I was happy and my buyer was happy too. She wrote this in my eBay feedback, "Thank You! Great Boots! Very Satisfied! Great Seller! A+++++" ...Now that's what I call a Win-Win!

Even though she initially doubted her dear old Dad, I gave my daughter the proceeds of the sale. I was a little conflicted about doing that, how's she going to learn the value of money when I keep handing it over to her? (sigh)

So I guess I need to check my own trash can on a regular basis. Who needs to waste time at the garage sales? My daughter is throwing away perfectly good stuff I can sell on Ebay!
Pin It now!
Posted by Dude ! at 5:44 PM