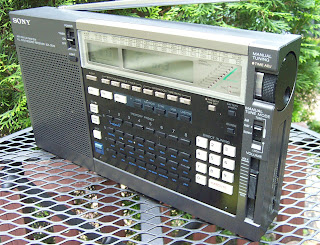 Sometimes selling on eBay can be a quick process: bring stuff home, take a picture, post it, then a week later you count your money. But other times you bring the stuff home and hit an immediate road block... you discover the stuff is broken! You then have to ask yourself: do I try to fix it or just sell the thing "as-is" and take my lumps with a lower closing auction price?

I was faced with that tricky dilemma after I bought this Sony Shortwave radio. I paid only twenty dollars for it at the Goodwill Store and doubt I will find another one any time soon. This awesome radio was considered top-of-the-line when Sony manufactured it back in the Eighties. It has all the high-tech bells and whistles that shortwave collectors go nuts for ! (If you take away anything from today's story it's this; name brand shortwave radios are a solid Ebay sale for you. If you see a reasonable priced shortwave radio at the yard sale or thrift shop, don't hesitate to buy-it will sell.)

The problem with my Sony shortwave radio was that it did not turn on. Sort of an important function and probably why it ended up in a thrift store. However, the digital readout showed a mysterious message which read "Error 3". I pondered my predicament, should I sell the radio "as-is" or do some research on "Error 3". Selling the Sony as-is meant earning a lot less money. The "as-is" tag takes a whole segment of potential bidders out, leaving only the handy "fix-it yourself" types to bid on it. I decided to "Google" the problem and see if I could figure it out before resorting to the lowly as-is auction. I typed in the Sony radio model number, along with "Error 3" in the search bar. I immediately found several Shortwave collector websites and "strings" discussing what turned out to be a common problem with the radio. I learned that you could attempt to fix the problem by taking out the batteries and pushing a small re-set button in the battery compartment. I carefully followed these steps as if I was defusing a bomb! When I finished I closed the radio back up and hit the power button... lo and behold the "Error 3" message had disappeared and the radio turned on! Dollar signs appeared in my eyeballs just like a Warner Brothers cartoon character....Ka-ching!

I went ahead and posted the radio on eBay. No need for an "as-is" description, this radio was working great thanks to my Internet research! Shortwave radio collectors found my Sony and bid like mad! It was a fun seven day run watching my thrift store find go up and up. On the seventh day the radio closed with an impressive bid of, now hear this...... $220 bucks! This was eleven times my initial investment, well worth the extra effort I took researching and fixing the problem !

So if you come home with stuff that you think is broken don't lose faith. Take a few minutes to research the problem. With Google at your fingertips, you may be able fix it yourself and power up your final auction price!
Pin It now!
Posted by Dude ! at 1:17 PM