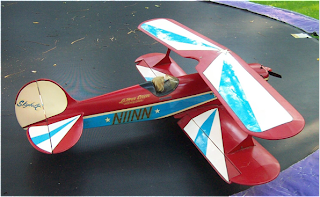 On one profitable Saturday morning, I walked up to a garage sale at a big beautiful house. There were lots of people milling around and I recognized the owner. He was a local school board member and I chuckled to myself as he feverishly ran around pulling stuff out of his packed garage. He seemed overwhelmed with trying to sell his accumulated treasures, while at the same time glad-handing locals who arrived to check out the goods. Overhearing his conversation, I learned he had just sold his lakefront house. The only hitch in the sale: he had to vacate and move out quickly.

There can be no better garage sale then an owner who has to "bug out" fast. These folks are primed to let their stuff go cheap! On top of his emergency fire sale, this guy was a true pack rat. His garage was loaded with boxes of stuff he apparently could not part with...until now. This was a perfect storm for the garage sale shopper !

Walking around his stuff, I nearly tripped over this huge gas powered model airplane. It was big and beautiful. I asked Mr. School Board member what he wanted for the plane. Still politicking with some local voters, he looked over to me and said “How about twenty bucks?” Something this big and unusual is always a winner in my book, so I didn't dicker over this already low price. I peeled off twenty and walked the plane down to my truck.

But when you've found a good fishing hole you have to go back...my work here was not yet complete! I wandered through his garage some more and found three old high school yearbooks from back in the Seventies. I also found three local town commemorative pewter mugs and one pewter plate. Stacking the plate, mugs and yearbooks into a pile, I asked Mr. School Board what he wanted for each? He waved his hand at them dismissively, “Take them-they're free.” Huh? Did the guy think I had voted for him and this was my payoff ? Probably not, I think he was so overwhelmed with the task of unloading his years of accumulated junk that he was just happy to get rid of it all. Not being one to look a gift horse in the mouth, I thanked him and headed off to my truck with all my free booty.

I have since sold the three mugs for $15.00 each and the plate for $10. I sold two of the Yearbooks for $35 each and still have one yet to sell. (High School year books can be a nice flip, more on that later) All that free stuff netted me $125 bucks and I still had my very cool plane to sell!

I decided to sell the gas powered plane on Ebay over Craiglist. I thought more potential buyers would find it and drive up the auction's final price. However, I made the auction “pick-up only” due to its bulkiness. The auction had over 50 people watching it and I fielded numerous e-mails begging me to remove the "pick-up only" requirement. While it would have meant an even higher closing price, I decided against doing it. I did not want to get involved with the complicated hassle of taking the plane apart and possibly damaging it. So it stayed "pick-up only" and I still did pretty good in the end... my twenty dollar plane ended up selling for one hundred dollars!

So in all, I made $225 dollars on a garage sale that cost me a single twenty dollar bill. Not bad for a Saturday morning walk up a driveway!