It's the Law...Police and Law Enforcement collectibles sell! 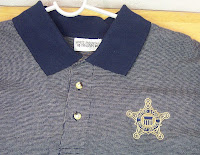 If you found a shirt or hat at a garage sale with a police badge emblazoned on the front would you buy it? You better Danno, because Ebay is filled with Law Enforcement collectors! LE (Law Enforcement) stuff is very collectible. I always keep an eye out for golf shirts and hats with police emblems on them. There is a huge segment of collectors out there who love to buy, display and trade all things LE.

But you have to be a little bit careful. There are some eBay regulations on law enforcement collectibles. For example, once I tried to list an old wooden police night stick but it was quickly removed by eBay because it is considered a weapon. You will also get a nasty e-mail if you attempt to sell a "Fraternal Order of Police" or "PBA" anything, so don't bother with those either. Both FOP and PBA are very protective of their associations and trademarks and will be on you like a cop making an arrest!

Avoid any local police department shirts, these have only limited interest and can draw the ire of the local coppers if they see it on eBay. I once listed a local police department polo style shirt and was subsequently bombarded via E-mail by a local “Barney Fife” type. Deputy Fife basically accused me of somehow stealing the shirt from his police department. I politely explained to him that one his officers must have donated it to Goodwill since I bought it there. He must have been a heck of a police investigator, because he didn't believe my story and with no further evidence basically called me a thief! I was getting ready to blast him back when a cooler head interceded. His Police Chief followed up with an E-mail explaining that they did not want the shirt to fall into the wrong hands. ( I guess that's why he was the Chief and Barney was only a deputy!) I think it was an overreaction on their part, the shirt was not official uniform type stuff. But I am very pro-law enforcement, those guys have a difficult job and I am not going to cause them any extra aggravation. Even though the Chief offered to pay for it, I ended up donating the shirt to the police department and mailed it to him gratis.

But don’t let that little side story dissuade you, I have done very well selling State Police and Federal Law Enforcement shirts. I occasionally find these shirts at the thrift stores. The above picture of a great looking US Secret Service polo shirt was a big winner for me. It had the agency emblem stitched on the front, very top quality stuff. I paid only five bucks for it at the local Goodwill Store. No secrets here... the shirt sold for fifty bucks on eBay! Now that's a sweet return! So keep an eye out for the right kind of law enforcement collectibles and buy and sell em Danno!