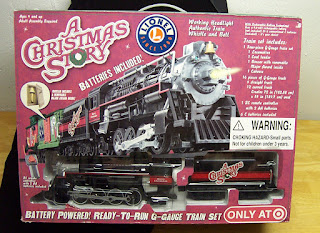 Holidays are a crazy time. I am busy selling off all my Christmas inventory accumulated over the garage sale season. I stockpiled tons of stuff in anticipation for the Holidays: Dept 56 Christmas village houses, new shirts and sports jerseys, American Girl doll stuff, train sets and more. Just as soon as something is paid for, I wrap it and get it in the mail. I don't want sold items hanging around this time of year. During the Holiday hustle and bustle it can be easy to overlook a paid item and forget to get in in the mail. To prevent a slip-up I follow a simple rule....as soon as the buyer pays-it ships!

When it comes to inventory it's not difficult to find stuff if you know where to look. A great hunting opportunity begins in January. That's when the post-holiday mark-downs really kick in at the stores. For example, last January I found a Dallas Cowboys football jersey for Tony Romo in a local Kohl's department store. It was hidden in the back of the racks with a mark down price of only three dollars. The original retail price was probably around $30 or more, now that's an awesome mark-down! Since very few people are buying football jerseys in January, I stored it away for my Christmas auctions. I posted the jersey the first week of December and it sold for $28. This was a net profit of $25...thank you Kohl's! (As an aside, selling sports team jerseys is a smart niche eBay business. A friend of mine did this and drove a weekly circuit, going from store to store. He would find marked-down football and baseball jerseys at his various stops and flip them on eBay for nice bucks.)

Another place to look for post-holiday deals is your local Goodwill store. Walking into Goodwill sometimes feels like entering a Target "clearance" Store. Once Christmas is over Target donates much of their Holiday inventory to Goodwill. I am told they do this because they need to quickly make room for their Spring and Summer inventory. If you go into a Goodwill Store you'll see Target packaging everywhere; lights, trees, decorations, household stuff and more. Over the last several years I have consistently found Lionel Train Sets sold exclusively by Target. You'll know the sets because Target has their name slapped right on the front of the box. Last year Target sold a Lionel "A Christmas Story" train based on the movie with Ralphie and his Red Ryder BB gun. A few months later I found a set at the local Goodwill Store for only $25 bucks. Like the football jersey, I stored it away for Christmas. Just a few days ago I listed it on Craiglist. It was snapped up by a women who bought it as a gift for her nephew. She paid me $60 for it, so I cleared $35...a quick sale and a nice profit!

So when the holidays are over don't get the blues. Head out to the local department stores and Goodwill to scoop up those post season bargains. Maybe you'll find Ralphie's Red Ryder BB gun...just don't shoot your eye out!
Pin It now!
Posted by Dude ! at 3:32 PM