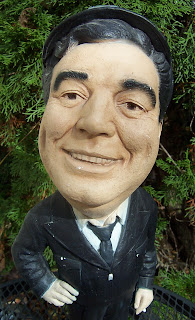 You may remember my personal saga back in the Fall when I was confounded by a Goodwill employee. I had discovered a Jackie Gleason Esco statue weirdly placed in the middle of a Goodwill Store Halloween window display. Esco's are highly valued by collectors and Jackie is on the top of that list! Knowing this, I attempted to "liberate" Jackie from the display by purchasing him. The sales clerk yelled at me sternly! She told me in no uncertain terms that window display items were not for sale until the Saturday before Halloween. Once the display was taken down, Jackie would be available for purchase. I left the store depressed that I would never get the chance to buy Jackie.

I never forgot poor old Jackie after that day. So guess where I headed that Saturday morning before Halloween? Yep, to rescue Jackie...that is if he was still there! My plan was this: I would run through my usual Saturday morning garage sales but would depart for Goodwill about thirty minutes before they opened. This would put me at the store right at 10 am when they unlocked the doors. That Saturday, I finished right on time and steered the truckster towards the Goodwill Store. It was nice sunny October day as I raced to the store, hoping against hope that Jackie would still be there. I pulled into the parking lot right at 10 am. True to the word of that stern Goodwill clerk, they were breaking down the Halloween display in the lobby. I ran inside and looked for Jackie. I looked at the empty shelf where Jackie had been weeks before but he was gone! Like a kid who just lost his puppy, I said to the lady tearing down the decorations, "Hey, what happened to the statue that was sitting in here?" She barley turned around and with her hands full of Halloween cobwebs she pointed, "it's on the counter inside."

I turned to look inside and like a love-struck teenager, I saw my Jackie Gleason Esco statue! He was sitting on the counter and smiling at me! I am pretty sure I heard harp music playing and little birds flying around Jackie's head, but I may have just imagined that! I briskly walked over to the counter and grabbed good old Jackie. He was no longer just a Halloween display, he was now official Goodwill store merchandise for sale. I looked for the price sticker and found it on the back of his head. I was taken a little aback when I saw what the price was...$30 bucks! It was way more then what I usually paid at garage sales. Normally, I pick up Escos for only five or ten bucks. Ironically, I once paid only five for a James Dean statue at another Goodwill store. But that's Goodwill for you-no consistency with pricing! The inflated price may have been due to me and other thrift store collectors asking about Jackie over the weeks that he sat in the window display. We were telegraphing to the employees that the statue was collectible so they jacked up the price!

But what could I do? I came this far for Jackie, I couldn't leave him behind. So I paid the $30 under silent protest and left with the big guy cradled under my arm. Jackie and I had a long talk on the way home. I apologized to him for leaving him there that day in September, sort of like Tom Hanks did with "Wilson" the volleyball as he floated away from the raft in the movie Castaway.

After our heart-to-heart on the drive home it was time to get back to business. Jackie went on eBay a few days later and I started the auction's opening bid for exactly what I paid - $30 plus $25 shipping. I also uploaded five pictures including front, back, sides, and close up of Jackie's face. Esco collectors are very concerned with chips or cracks, so pictures help alleviate these questions. The auction ran it's usual seven days with a nice amount of interest. My Saturday rescue mission was worth the effort, Jackie sold with a final closing bid of $70 even!

Even though I have done better with other Esco statues, I was happy with a $40 profit. Part of the satisfaction on this flip was acquiring Jackie after being flatly denied on my initial attempt to buy him. So it's not just the good money you earn that makes this business fun, but the thrill of the hunt too! As for Jackie? Never again will he be forced to demean himself in some tacky Halloween display!
Pin It now!
Posted by Dude ! at 3:04 PM