Lemons into a little lemonade. 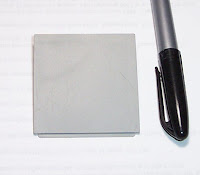 All of us labor at the garage sales and thrift shops, hoping to score big on every find. But let's face it, not every find is going to turn into big bucks. In fact, some can turn into a big bust! Sometimes it's because the item bought turns out to be broken. Back a few blogs ago, I described how I repaired a shortwave radio then sold it for over $200 bucks. That potential bust turned out great, but what if you just can't fix it, are you stuck with a loss? Maybe not, here's an example of a small salvage operation that saved me money.

Above is a Eighties era "Speak and Math" computer toy by Texas instruments. I bought this at a garage sale for three bucks. These vintage computer toys do very well on eBay. The company also makes a "Speak and Read" and other educational models. I've sold a few of these and usually get around thirty five dollars for each one. So when I bought this one, I figured I had another thirty bucks coming my way! But when I got the toy home and popped in some batteries guess what happened? Absolutely nothing...the dumb thing would not turn on! So there I was: three dollars in the hole and a dead toy...a major bummer! Hating to just throw away a hunk of plastic, I considered selling it "as-is". Maybe a handy fix-it type buyer would buy it and get it working. But I was just kidding myself, there's not a huge demand for broken electronic toys from the Eighties.

However researching further on eBay, I noticed a common trend with the "Speak & Math" toys. A fair amount of sellers were selling the toy with a missing battery door. This is a common bug-a-boo with many toys, the battery door goes missing like some kind of escaped convict busting out of jail. (Don't even get me started on TV remote battery doors, mine is always leaping off the clicker and tunneling itself between the couch cushions!) So while my toy didn't work, it did have one thing going for it...the battery door was still present and accounted for! In a desperate attempt to recover my initial three dollar investment, I decided to try to sell only the battery door. A collector would have the opportunity to make his Speak & Math complete...I was like a matchmaker!

I listed the battery door for five bucks with free shipping. I had to be the only seller in the whole eBay world listing a Speak & Math battery door, but you know what? The little piece of plastic actually sold for five dollars! After paying a minimal shipping cost and listing fee, I was now in the black instead of the red!

You may be thinking, "Dude, you made a few bucks...what's the big deal?" Well, in this business you have to avoid taking losses, even a small one. I was almost stuck with a worthless toy that cost me three bucks, but instead I recovered my initial investment and then some. Now I could put that money back to work for me. Maybe those recovered bucks would buy me a doll that I could flip for fifty, or a team jersey that makes me a hundred! It's basically a chance for a do-over !

So if you buy stuff you think is broken and worthless, don't write it off just yet. Look it over and try to salvage something from it. You may be able to turn lemons into lemonade!
Pin It now!
Posted by Dude ! at 12:16 PM