Saturday morning with the boys at the dump. 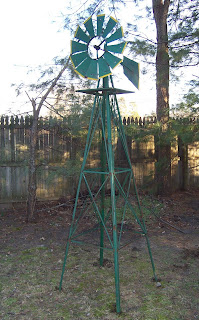 It's still Winter here in my part of the country. Although the temperatures have recently warmed up to a balmy upper thirties, February remains a no-garage sale season. However, last week the garage sale Gods smiled down upon me! I found a lone garage sale posted on Craigslist. The listing said, "Man cave stuff for sale". That's all I had to read.... I was there!

The listing said no early birds, so I arrived right at the traditional 8 AM start time. I drove up the gravel driveway to a handsome looking two-bay steel garage. (Guys appreciate such magnificent structures) Upon entering this fortress of manliness, I greeted the seller. He was an older gentleman with a white goatee, flannel shirt and a John Deere cap. He already had a nice morning fire blazing in his wood stove. He was the handy type with lots automotive and construction tools hanging all over the place...a good sign!

The seller told me he had recently sold his property and had to move in about a month. He and his wife planned to move temporarily to an apartment with a final destination of Florida. I joked with him that I would buy the whole building and move it to my backyard! We continued with a nice chat about the real estate market, then I began looking for some good eBay inventory.

After some poking around, I grabbed a few things that I thought would do well on eBay. I bought a CB radio and an obscure piece of electronic equipment called a radio amp booster. He sold them both to me for for ten bucks. I also bought a small hand carved wood duck for two bucks, which I expect will fetch at least twenty on a good day. Satisfied with my small take, I wished the old-timer good luck on his move and went back out in the cold. But as I jumped back into the truck I eyed an eight-foot high farm windmill standing in the yard. Since I knew the seller couldn't take this big monstrosity with him, I asked him if he would sell it to me for ten bucks? He quickly agreed and I strapped it into the bed of my truck. It was a scary ride, the wind was blowing and the prop was spinning furiously! My little pick-up truck looked like some kind of crazy flying machine. All I needed was wings!

I had one diversion before heading home with my new stuff. I had to stop at my town's municipal recycling center to drop off some old paint cans. (We use to call these places the town dump.) My windmill was still strapped to the truck as I pulled in to dispose of the paint cans. I quickly became the center of attention to the municipal employees...they wanted my windmill! The employees came flocking towards me like the zombies in that Michael Jackson "Thriller" video! The whole recycling operation came to a grinding halt as the guys rushed up to me asking if I was dumping off the windmill? I knew I would get this reaction...these guys scarf up all the best junk at the town dump. It's a perk of the job!

The guy's were crestfallen when I told them the windmill wasn't being dumped. Always hoping to turn a quick profit, I told the boys the windmill was actually for sale! Nobody bit on my offer though. These guys never pay retail for junk at the dump and weren't about to start now! Although they were disappointed, a few of the guys lingered around and admired my windmill as I proudly explained how I acquired it. One of the guys even offered to grease the axle of the prop with a dump-salvaged grease gun. I thought this was government service above and beyond for a town employee! After dumping off the paint cans and wrapping up my garage sale story, I bid the boys adieu and headed out. Some of the guys watched mournfully as I pulled out, looking like they had just lost the big fish that got away!

I wasted no time listing the farm windmill on Craigslist. The boys at the town dump illustrated the keen interest in the green monster. In under 48 hours the windmill sold for fifty dollars...a quick profit of forty! The CB is up on eBay right now and should sell at around $35. The hand carved wood duck will see at least twenty. The Amp booster is a whole other story. Apparently it's something of an "underground" market type item. In other words, not permitted to be sold on eBay. If it does sells it may go for big bucks. I'll share that story later.

So after spending $22, I am currently up about $40 bucks with more to come. Isn't it awesome that you can wake up on a beautiful Saturday morning, take a drive in the country, meet some nice folks and make money all at the same time?