Seriously...is anyone watching all those DVDs ? 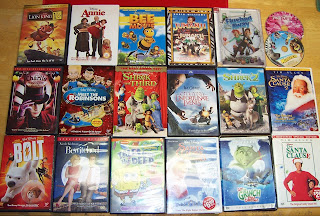 I'll bet your house is a lot like mine. You have tons of DVDs laying around that no one watches anymore. You know the routine when a new movie is released on DVD. It's displayed prominently on the end of the aisle at Target or Walmart and your kid throws it in your cart, right? That's what happens around here. As a result, we have a ton of these movies the kids haven't watched in years. Sure, they may have played them a couple times, but soon enough the DVD ends up under the sofa or buried in the entertainment center. To make matters worse, sometimes the kids forget to take the movie out of the DVD player or put it back in the correct DVD case! They're unbelievable right?!

But I digress...the real point of my story is you need to unload these DVDs now. With the rise of Netflix on-line movies, people are slowly moving away from buying DVDs. These discs may soon become as worthless as VHS tapes, another outdated movie format. Now is the time to dump them!

I've found the trick to selling DVDs is to bundle them. There's really not much money in selling individual movies. If you think you may have one that would sell all by itself, by all means look it up on eBay. But most are not worth much. Take a look at my photo...who's going to buy a single copy of "Jumanji? (Probably one of the loudest kid movies made and guaranteed to to give you a migraine!) Just last week I sold a copy of the Oscar winning movie, "Slumdog Millionaire" on Half.com for a meager $3 dollars. It was hardly worth my effort.

So bundling in a big lot is the way to move DVDs. Buyers like making a purchase this way. They get a bunch of movies to keep their kids busy for hours on end. Not long ago I bundled the above kid movies and listed them on eBay. There was a nice variety of titles: Shrek, Bolt, Bewitched and more. It must have been a good idea because this lot sold for a big fat $56 dollars! That's enough cash to pay for a nice Friday night dinner at a local restaurant! If you average this sale out it's just under three dollars a DVD. You could have sold each individually on eBay or Half.com for around the same price, but who wants to wrap and ship 18 individual DVDs? Not me, that's a hassle!

Obviously if you have kids your house is already a great source for these DVDs. They can easily be found at the garage sales too, but never pay more then a buck a movie. So grab a box and head up to your kid's room or wherever you stockpile your movies. Time to clean house and make some "Dinner and a Movie" type money!
Pin It now!
Posted by Dude ! at 5:09 PM