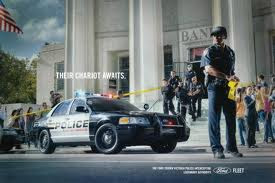 I love when I can take something that I received for free and turn it into a nice little profit. Just because something is free doesn't mean it's not valuable to someone out there. It's all about availability. If collector's can't acquire it easily, even if it's free, then they will be more then willing to pay for it. Take the Ford Crown Victoria Police poster seen here. Ford prints these every year to promote their police cars and hands them out for free at some car shows. I usually acquire a few every year. The first one I acquired went back almost ten years. I thought it was cool so I tacked it up in my garage where it collected dust.

About a year ago while cleaning the garage, I looked up at the poster. It was hung high on the wall so it wouldn't get ruined. But despite it being posted up high, I knew it would never survive a lifetime in the little shop of horrors called my garage. Somehow, some way, I would eventually put a rip in the poster with my ladder, spill paint on it or some other disaster. So I decided to go the eBay route.

The poster was from a few years back, but was still in good condition. I gently took it down, dusted it off and took some photos. Once on Ebay, I learned quickly that collectors were interested in the old poster. I watched in amazement as it clicked up progressively during it’s run. On it's final day, the dusty poster topped out at $75! Not bad for something that hung in my garage for years!

In a tale of two posters, my brother had been with me at the same car show and picked up the exact same poster. So after my auction, I naturally bragged to him how I pocketed a quick $75 from it's sale. My brother was bummed out from the news..... he had recently torn his poster off the wall and trashed it! He basically threw away $75 ! But let's face it, if everyone kept the poster and sold it on eBay, I wouldn't have been able to sell mine for $75. It's the old supply and demand story!

Not every Ford poster returns that kind of profit, obviously the older the better. The current one seen in the picture sells for around ten bucks or more. But if you hold onto them, they only go up in price! So just because you got it for free doesn't mean you can't make a few bucks from it! What's hanging on your walls?