Don't let the color fool you! 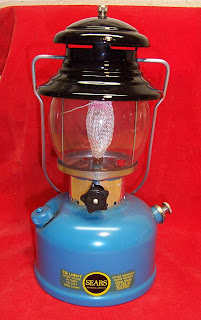 What do you think of this powder-puff blue camp lantern? Not your typical camping lantern seen at most garage sales. I wasn't so sure it was worth buying but I did. Turned out to be a good decision. Here's the story...

Doing my usual Saturday morning rounds last year, I came across a garage sale not advertised in the local paper or Craigslist. I always approach these spontaneous yard sales with added interest. Garage sales that are not publicized in the paper or Internet mean fewer buyers and more good stuff for you! As I walked up the driveway of this sale, the seller was busy pulling stuff out of moving boxes. Shipping paper was everywhere as she worked her way through about a dozen or so boxes. She told me she had recently helped a friend move and the boxes were leftover stuff intended for the Salvation Army. But instead of taking them to the thrift store, the seller asked her friend if she could have the boxes for her garage sale. Her friend agreed, sort of as payment for all her hard work.

She had an assortment of so-so stuff, but when she pulled out this powder blue camping lamp from a box, I took notice immediately. As discussed in previous blogs, camping gear like Coleman sells well on eBay. This powder blue lamp looked exactly like a vintage Coleman lamp, but had a Sears decal on the front. Looking it over, I could see the lantern was uber-clean and in excellent condition. I asked the seller what she wanted for it and she threw me a price of three dollars. I thought about for a minute, debating in my head if this thing was some kind of cheap, Sear's knock-off. Since Coleman is king in camping, I also wondered if anyone would be interested in a Sears camping lantern? After a little more self-doubt, I decided a three buck investment was well worth the risk.

I brought home the powder-puff blue lantern and took a bunch of photos showing it's clean, near-new condition. I also learned that it actually was a Coleman lantern made exclusively for Sears. The Coleman company basically painted it blue to distinguish it from their more famous forest green color. So I was happy I had a Coleman, but still not sure if collectors would be interested. Let's face it, you don't normally associate the color of powder-puff blue with camping in the great outdoors!

Despite all my misgivings, I posted my three dollar find on eBay. Shortly thereafter, I began receiving international inquiries, asking if I would ship overseas? My auctions usually state domestic only, but with all the foreign inquiries I decided to open up the auction to overseas bidders. At that point the flood gates opened and bidding blew up! The powder blue lamp started climbing....thirty, forty, fifty dollars. Curious, I typed in Sears vintage camping lanterns and found a handful of them listed. The completed auctions were seeing nice prices with most of the buyers from Japan. Apparently, the Japanese have a thing for powder blue camping gear!

The lantern continued to climb and things got interesting. On the final day it was north of $150. In the final minutes of the auction the bids blasted passed the $200 mark and closed at.....wait for it... an incredible $221 dollars! And the buyer was from where? Japan, of course!

Looking back, I have laugh to myself. I actually stood in the seller's driveway and wondered if eBay buyers would be interested in an odd looking powder-puff blue camping lantern! Fortunately, I went with my gut and it paid off nicely. So if you see power-puff blue, it could really mean green $$$ for you!
Pin It now!
Posted by Dude ! at 2:18 PM