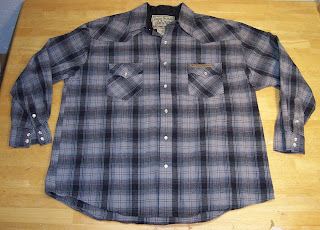 Jesse James, the famous bike builder, entrepreneur and all around dirty, rotten scoundrel has been in the news lately. James has what I am sure is a real page turner of an autobiography which he's been flogging in various media appearances. I watched him on CNN being justifiable grilled by Pierce Morgan. He looked like he would've preferred to have been subjected to a public stoning! Obviously, James is not real popular with the general public right now, especially after the stunt he pulled on his former wife and America's sweetheart, actress Sandra Bullock. But let's put all that judgemental stuff aside for one moment because you and I are here to make some money. Despite all Jesse James' shenanigans I can tell you one thing for sure...his shirt brand is hot stuff on eBay!

James has a line of shirts based on his West Coast Choppers bike shop called "Jesse James Work Wear". In my opinion they look like nothing more then the cowboys shirts the little kids use to wear back in the fifties. All they need to add is some rope braiding and a cowboy hat! But apparently these shirts are the hottest thing in biker fashion. When you find a Jesse James Work Wear shirt you'll know it. Typically, they are plaid or auto mechanic dark blue with his West Coast Choppers logo on the shirt and embossed on the snap buttons. There is also a huge Jesse James Work Wear patch about the size of a postcard sewn inside below the collar. Anytime I come across his shirt in the Goodwill Store my toe taps a little faster in my sneaker. These shirts are a guaranteed sale and will net you easy money.

The shirt seen in the picture was bought for $5.00 at a Goodwill Store. I turned around and sold it on eBay for $31 dollars. Overseas buyers love these shirts too. For reasons unknown, I get a lot of interest from Sweden and Denmark . My average Jesse James sale always seems to range right around the thirty dollar mark. Backing out the average thrift store price of five bucks, you're looking at a profit of twenty five dollars. Ain't bad right?

Yep, Jesse James is not winning any popularity contests these days...but his shirts are.
Pin It now!
Posted by Dude ! at 10:44 AM