A tub full of money 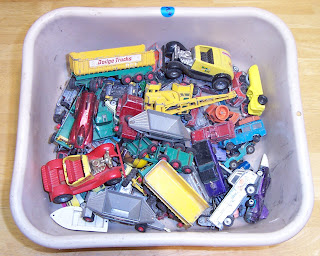 I like a garage sale find that keeps on giving. Take a look at this plastic tub filled with metal diecast cars and trucks. Doesn't look like much right? Judging from their appearance, the kid who owned these must have had alot of fun with them. Many were either beat up, missing parts and/or caked with dry dirt. But despite their sad appearance, these old toys generated me a stream of excellent sales... all for an initial outlay of just two dollars!

I bought the cars from a family who were moving out of town. Their house was an old 1940's style cape, the kind with a detached garage set in the back of the property. Just like their house, the sellers seemed to like anything old and had a nice eclectic mix of antiques and collectibles for sale. I almost tripped over the tub of cars which was laying in their driveway. Looking them over, I could tell they were from the Sixties and Seventies. Old diecast cars and trucks can be big sellers on eBay, with plenty of baby boomers looking to collect the toys they played with as a child. Although these cars weren't exactly pristine, their crummy condition didn't matter. Many collectors use them for parts or restoration. I immediately picked the tub up and continued to peruse the rest of the sale. I then spotted an old Tonka metal tow truck. I grabbed the little tow truck and set it in the tub with the cars. Walking over to the seller, I asked her if she would take two dollars for the Tonka truck and cars. She gave me quick yes and I peeled off two George Washingtons.

Back at the ranch, I inventoried all the cars with an eye towards selling them in lots by brand. After getting lots of dried mud on my hands, I determined the cars were primarily Corgi, Matchbox, Hot Wheels and Tootsie. Once they were grouped and photographed, I began posting my "tub" auctions. The first to go live on eBay was the little Tonka tow truck. The truck got things rolling and sold for seven bucks. Not huge, but now I was up five big ones with lots of cars to go! Here is how the rest of the auctions played out:

If you don't have a calculator handy the total came to (drum roll please)....$78 dollars!

Now take another look at that picture of those crusty old cars. Would you think that pile of cars would total $78 dollars? That's what I call a tub full of money!
Pin It now!
Posted by Dude ! at 6:11 PM