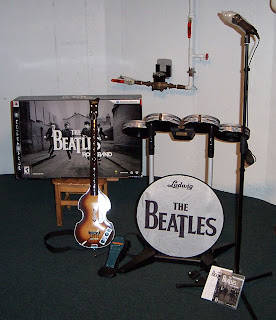 Who isn't a fan of the Beatles right? They were the greatest rock band that ever was! I can remember when my older sister would constantly play her Beatles' records in her bedroom. When she would leave the house, I would sneak into her room and throw on the Beatles albums and sing along. Little did any of us know that one day with the help of a computer video game, anyone could practically be in the band!

To be the fifth Beatle all you need is the PlayStation Beatles "Rockband" set. (There's also a Nintendo Wii system version) I found this Sony PlayStation version at a garage sale back in the spring. It came with Paul's guitar, Ringo's drum kit, a microphone stand and the original DVD still in the wrapper. The women who sold it to me was a huge Beatles fan. Even though she never played Rockband before, she said she got swept up in all the excitement and just had to to have the Beatles version. Her devotion was admirable, these sets sold for $250 brand new! After owning it less then a year, she decided to make a little room in the house and sell the set.

The price tag for this awesome set was fifty dollars. I am not an expert on Rockband sets, but after doing some quick eBay look-ups on my phone, I realized I could easily double my money. Naturally, you never want to pay full asking price, so I tossed out a low ball price of forty. She agreed and the next thing I knew her husband was helping me load the set into my truck.

Once you score a set like this there are two basic ways to sell it. You can break it up and sell each piece separately. For example, Paul's guitar could sell for as much as $75 on eBay. While you might make more money going this way, selling each piece individually takes time and is much more work for you. There are more photos to take, more auctions to post and more packages to wrap and ship. Your other option is to keep everything together and just sell it as a set. The advantage to this is you make your money quicker and with much less work. Since I am a bit lazy this time of year, I decided to keep the Beatles set intact and posted an ad on Craigslist.

Using four photos including the one seen above, I started the Beatles set at $125. But after a week's time on Craigslist the only thing I heard were the sound of summer crickets. So I lowered the price to $100 and quickly received an e-mail from an eager buyer. He was an older gentleman who also grew up with the Beatles. He came right over to the house and handed me a crisp one hundred dollar bill. He and his kids were going to rock out with the Beatles! How's that for bringing the generations together?

So the greatest rock band in the world helped me turn forty into one hundred dollars! This eBay business...It's getting better all the time!
Pin It now!
Posted by Dude ! at 3:46 PM