Flannel shirts and radios: who could ask for anything more? 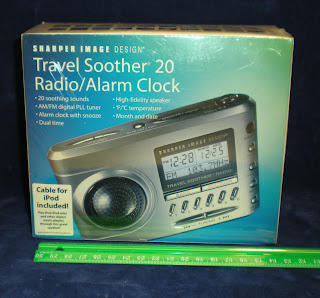 On any given Saturday morning you can come across garage sales, yard sales and tag sales. Although they have different names, they are basically all the same in terms of merchandise. Usually you'll find lots of toys, kid's clothes, sports equipment and other family oriented junk. Then there's my personal favorite...the estate sale. It's here you'll often find a lifetime of accumulated belongings: antiques, tools, furniture and much more. Recently, I came across a local estate sale that did not disappoint!

It was the first one of the morning and this estate sale was just five minutes from my home. I barley started to sip my coffee when I rolled up to the old house. Estate sales often have a few obvious traits. They're always at older homes containing antiques and collectibles. Secondly, the people doing the selling are typically the grown children of the person who passed away. Often times they are ready to sell cheap because they're looking to get the house cleared out quick. So when you find an estate sale, get ready to hang around a little longer then normal. You'll be rewarded as the kids bring out box after box from their parent's house.

At estate sales you'll also discover what I like to call the "Gifts received but never used" category of stuff. If you have older parents, you know what I am talking about. How often have you given good old mom or dad a gift they refuse to use? Older folks are set in their ways and are comfortable with the things they already have. They hate new stuff and just put it away-usually in the box it came in! When you're at an estate sale search for the "Gifts received but never used" section. You can even ask the kids, they'll probably point it out to you!

This category was prevalent at the estate sale I found and made me laugh. Apparently, the old-timer's kids either completely gave up trying to come up with new things to buy dad or they just lacked any imagination when it came to gift giving. It was pretty obvious this particular dad liked two things: flannel shirts and table top radios. There were tons of both at this sale, it looked like a cross between Radio Shack and the Men's department at Sears circa 1975! I counted almost fifty flannel shirts still in the cellophane packaging and almost as many radios in boxes. God bless this old timer, because if shirts and radios were love, well then this fella was really, really loved!

After amusing myself with the thought of the old timer's shirt bonanza, it was time to get down to business. Generally speaking, basic table top radios are no biggie on eBay so I don't buy them. However, among all the basic radios at this sale, I found a sweet "Sharper Image" travel alarm clock/radio. This radio was never opened and still in the original shrink wrap! Yet another "Gift received but never used " given to the old timer. When it comes to eBay, pretty much anything Sharper Image is money! For example, not long ago I discovered my son's old CD player/alarm clock shoved in the back of his closet. I flipped it on eBay for a quick $35...pretty darn good for a back closet find! Knowing how well my kid's used alarm clock did, I was confident the Sharper Image Alarm clock radio would be "gold" on eBay. So I grabbed the radio off the table and continued my estate sale pursuit. I found a bunch more things, including a police scanner in the original box, a Sears tractor attachment, a camera and a few other things. The price on the Sharper Image radio was $10. I asked one of the son's if he would take $5 for it and he agreed. After paying up for all my nice finds, I loaded up my truck and was on my way.

Later that day I began researching my Sharper Image alarm clock radio on eBay. The prices varied widely, but I found one like mine that sold on eBay using a "Buy it now" listing. I wanted the most I could get on this radio, so I listed mine at the same fixed "Buy It Now" price. It was a good decision on my part. After only a few days, my five dollar radio sold for a cool "Buy It Now" price of $125 dollars! How's that for a sharp image?

Just another great score found in the "Gifts received but never used" section of an estate sale. Keep your eye out for this kind of stuff. They shouldn't be hard to find, they're usually right next to all the flannel shirts!