Toxic toys? Not in my neighborhood! 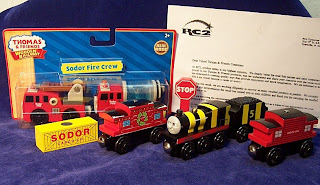 We talked a few weeks ago about the benefits of toy recalls. One of the more newsworthy recalls was the Thomas the Tank Engine lead paint fiasco. In that notorious screw-up, some wooden Thomas the Tank Engine toy trains were found to contain lead based paint. Primarily it involved Thomas wood train pieces made in China that were painted red. The recall program has been in place for a couple years and has been a buying opportunity for folks like you and me. Many of these toys can be had at garage sales for a dollar or less per train.

Best of all, you're not just buying toxic trains to make some quick bucks. Heck no, you're like a comic book super hero coming to the rescue of little kids! When you buy these dangerous lead based toys, you're helping to get this toxic junk out of the hands of innocent children. Did you ever think you could do a "good deed" at a garage sale while making money at the same time? You absolutely can...so go out and do lots and lots of good deeds!

Take a look at the brand spanking new trains seen above. These little gems were sent to me from the toy company RC2, the producer of wood Thomas trains. They were all replacements for lead based trains I bought at a recent yard sale. I only paid fifty cents for each train. While not all the Thomas trains have paint problems, it was easy to find out which ones fell under the recall. The company provided a consumer service hotline number and website. The website had photos of all the toxic trains. I clicked on each toy to create an inventory list of trains eligible for return. A few weeks later, I received a confirmation letter and a pre-printed postage label to return the trains. I wrapped each toy up and sent them to the manufacturer with the attached inventory list. About four weeks later, brand new replacement trains were in my mailbox! Not only did they replace each toy, but they gave me an additional brand new Thomas the Tank Engine toy in the package! I now have about a dozen of these replacement trains which I am stockpiling for Christmas auctions. The Holidays are the best time to sell Thomas Trains, they make great stocking stuffers or can be added to an existing set as a gift. During the holidays each train piece can sell in the range of $8 to $20 dollars. If I don't sell every train, I can always sell them in larger lots or with a train platform. (Discussed a few months ago in a previous blog)

As a cautionary note, I am not certain how much longer this program will be in place. I've learned that Tomy Corporation, a huge Japanese toy conglomerate just took over RC2. Now when you attempt to go to the RC2 company website, it immediately reroutes you to Tomy.com. But until the Tomy corporation shuts down the recall program you can be the "Toxic Avenger" super hero, removing dangerous toys off the street while making money at the same time!

Do you know any other toys recalls we all should be looking for? If so, let me know in the comments section or send me your story for the website. Happy Hunting!
Pin It now!
Posted by Dude ! at 2:14 PM