In honor of Steve Jobs: An Apple flip revisited... 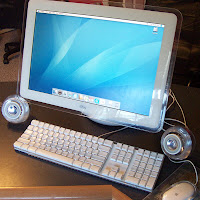 Dude's Note: In honor of Steve Jobs, I am re-blogging a great Apple Computer flip from the past.

I use an Apple computer to manage my far reaching Website, Twitter and blog accounts. I was the last holdout in the family, but my kids finally dragged me over to Team Apple a few years ago. Now our house is all Apple: iMacs, iPhones, iPads and even an iTouch. I am glad I made the transition. Apples are more user friendly and have a near zero chance of crashing with a bug or virus.

So last Fall when I came across this Apple IMac-G4 at a garage sale I grabbed it. A women sold me this eight year old computer for only twenty five dollars. This thing sold new for $1800 back in the day. It had an awesome Apple design with a 15 inch LCD flat screen that could pivot around like the famous Pixar lamp! I brought it home and my youngest son checked it out for me. He owned this same model a few years ago and knew his way around it. Sonny Boy began doing some Apple housekeeping, deleting some old files left by the previous owner and other geeky-tech stuff. But when I asked him to upgrade the software to make it run faster, he ran into a major roadblock. The operating system was password protected! I never thought of asking for the password when I bought the computer-who would? But no password-no getting into the operating system to upgrade things. It's sort of like not having the key for your car's trunk...you may not need to get into it right away, but eventually you will!

I implored Sonny Boy to scour through the files and see if he could find the password hidden somewhere. To his credit he found a password clue. It was a seven digit word and the clue was "Dad's nickname". He also found the owner's name in some documents: Paul Smith. (My fictitious name to protect the innocent) We assumed the dad was Paul and went to work. Like Wheel of Fortune contestants during lightening round, we tried a string of different nicknames: PaulDad, Pops123, Daddio1...all with no success. The situation was looking hopeless!

Seeing my potential profits slipping away, I decided I would try to find the lady who sold it to me. But without getting into the truck and retracing my steps how could I track her down? I am pretty good at remembering where I buy stuff, so I began by using Google maps. Because her house sat on the corner of two streets, I was able to locate it and figure out her house number. Now I had both the street address and their last name. I typed both in the Google browser and up popped the women's full name and her home telephone number! Scary right?

It had been four months since I bought the computer-that's a long time in garage sale years. But I had to break the code to get into the Apple! I looked over at my son in desperation, "That's it, I have to call her!" He agreed and sat back and enjoyed the show as I dialed the number. After a couple rings, the lady actually answered the phone! I began to explain how I was the guy who bought her computer back in the Fall. Trying my best not to sound like a cyber stalker, I told her I was now in need of her password. There was silence on the other end then she asked suspiciously, "How did you find my number?" Using the friendliest tone I could muster, I explained that between remembering where she lived and finding her husband's name in the computer files, I was able to track her down using Google. She seemed somewhat satisfied with this explanation, especially when I mentioned that my 14 year old did most of the detective work. With her now reassured I wasn't a wacko, I again asked her for the password. She paused then responded, "Oh I doubt I could remember the password, that was years ago."

At this point I turned into a TV game show host, "I can help you with that. Can you remember a seven digit nick name for your husband?" She paused and thought for a minute, then excitedly blurted out "Oh.... try Big Paul!" I shouted over to my son, "Big Paul!" He quickly typed it in and clicked the mouse. Like computer hackers, we waited anxiously while the iMac processed Big Paul. A second later my son yelled victoriously, "We're in!" The password worked! I thanked the lady and again reassured her we would wipe the computer clean of any leftover family files. After she hung up, I thought she was going to have a very bizarre story to tell Big Paul!

Once in, Sonny Boy was able to upgrade the software, making the Apple run faster and smoother. With his work complete, I posted the computer on Craigslist for $125. I could have seen $150 or more for it if I sold it on eBay. But like other bulky items I've sold, I didn't want the hassle of shipping the huge box. It took about a week, but I ended up getting my $125 from a Dad who bought the computer for his kids. I also made sure I gave him the password! Once paid, I forked over $25 to my son for his tech support work, leaving me a profit of $75 dollars.

This was a cool flip, combining my son's computer tech skills with some Internet stalking...whoops, I mean detective work! Sonny Boy and I had fun seeking out the previous owner on the Internet and cracking that pesky password code. It also illustrates the scary reach of the Internet and how you should make sure your computer hard drive is wiped clean of personal files before you sell it. Unless you sell it to me and my son!
Pin It now!
Posted by Dude ! at 1:55 PM