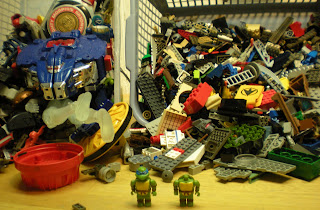 Take a look at these two baskets of toys. Originally I thought these were mostly Legos, but turns out they had some nice extra stuff mixed in. I bought them from a nice lady who started her garage sale at 9 AM sharp. Even though it was a late start, I somehow beat the "early birds" and had first crack at everything. Walking up the driveway, I was blown away at the amount of boy's toys. There were so many boxes and baskets of toys that it was almost overwhelming. Making matters worse, the toys were all mixed together. Don't you hate that? Basic Legos were mixed in with Bionicals. Duplos were thrown with Star Trek action figures. The mixed lot anarchy went on and on like this! It was enough to give any serious garage sale hunter conniptions! I mean gee-whiz, why can't kids neatly segregate their toys in separate containers by product? Yeah....maybe on another planet!

Despite the disorganized mess , I was able to walk away with a bunch of things including the two baskets of the loose pieces seen above. As I said, they included not just Star Wars Legos, but other brands too. I paid ten dollars for both baskets. After a little work combing through the pile, I was able to separate pieces by toy brands. If you look closely at the photo you'll see two little Lego Teenage Mutant Ninja Turtles standing proudly in front of the whole mess. Those two little guys were the first to go on the eBay auction block. Even though one guy was headless, I managed to sell the pair for ten dollars-the exact amount of my initial investment. Now all the other pieces were pure profit! With my original ten dollars back in my pocket, the remaining pieces were sold as follows:

So adding up all the auctions, those two baskets made me $80 big ones! And I still have some leftover pieces that I may be able to squeeze a few more dollars from. That's why I love mixed lots. If you buy the right stuff they can just keep giving! As the Ninja Turtles like to yell, "Cowabunga Dude!"

How have you done with mixed lots? If you have a major "mixed lot" score go ahead and brag about it in the comment section below!
Pin It now!
Posted by Dude ! at 3:51 AM