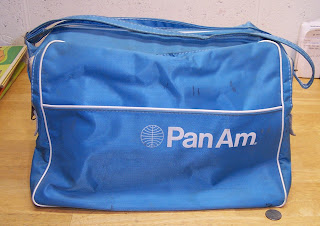 Riding the wave of a popular television show is always a good way to make some money on eBay. You may remember I found a phone shaped like a duck, similar to the one on MTV's Jersey Shore show that netted me $31 dollars! Not long ago, I found another artifact at a garage sale that did pretty good too....thanks to another TV show.

It was this old airline travel bag. This thing looked like it came off the set of Pan Am, the popular ABC television show. I came across this Sixties era luggage at a garage sale at a little old lady's vacation home. I could tell from her stuff, this lady came from money. She clearly had put this bag to use and probably jet-setted to glamorous and exotic places back in the day.

I picked up the bag and tucked it under my arm as I continued to look around the sale. Because of her age, the old lady had her daughters helping with the sale. But she was clearly in charge. Mostly, she sat in her rocker and gave orders to her kids from the front step. This lady had some attitude and looked like someone you really didn't want to mess with! Walking over to her, I expected to battle over the price of the bag. But her bark was worse then her bite. She charged my one dollar for the bag! I  gave her a quick, "Yes Mam, thanks" while handing her the  dollar. Relieved she didn't bite my head off, I happily walked away with a great deal. As I did, the old lady went back to ordering her kids around from her rocking chair.

If you want proof of how a popular television show can affect market prices on eBay, just try this simple experiment. Compare the selling prices of vintage TWA bags with vintage Pan Am bags on eBay. Both are defunct commercial airlines that were hugely popular back in the Sixties. But today, only Pan Am has a network television show named after it. You'll find that Pan Am bags are big sellers, while TWA bags see almost no bids. That's the power of television at work!

I couldn't wait to post my new find. My Pan Am bag went up on eBay faster then that old lady could get out of her rocker. It saw friendly skies during it's seven day auction and closed with a high bid of $30 dollars. Now that's what I call a smooooth landing!

So keep an eye out for vintage airline collectibles, particularly Pan Am. Here's another one that will really l get you motivated : http://www.ebay.com/itm/PAN-AM-AIRLINES-VINTAGE-STEWARDESS-HAT-AND-PIN-SIZE-22-1-2-/380385574981?pt=LH_DefaultDomain_0&hash=item5890bf4045