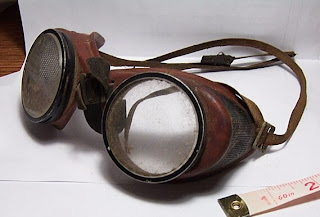 This site to passes along my garage sale success stories. But I've also learned some things form readers over the years. Jill wrote in about her Scooby-Doo find is a recent example. Another excellent tip came in just a few months ago. Site follower "We are Clamco" wrote in about a collectible genre not even on my radar: Steampunk. If you never heard of it don't feel bad-neither did I. Miss Clamco informed in the site's comment section that her husband sells reconditioned Nerf toy guns to Steampunk enthusiast. He buys the plastic guns at garage sales, then paints them up all steampunky, making nice money for his efforts. I was intrigued with this whole new geeky genre. It sounded like a huge market with potential sales written all over it.

Here's how Steampunk is described in Wikipedia:

"Steampunk is a subgenre of fantasy and speculative fiction that came into prominence in the 1980s and early 1990s. The term denotes works set in an era or world where STEAM POWER is still widely used—usually the 19th century, and often set in Victorian era England—but with prominent elements of either science fiction or fantasy, such as fictional technological inventions like those found in the works of H. G. Wells and Jules Verne, or real technological developments like the computer occurring at an earlier date."

Got that? If not, there are a bunch of movies depicting Steampunk fashion and machines. Foremost is the 1999 movie, "Wild Wild West" featuring Wil Smith. Watch that movie and you'll be completely schooled in the Steampunk genre. I'm a quick study, so armed with this new information I began thinking what I have that fits this niche market. I scurried to my garage and retrieved something that was totally Steampunk-an old pair of safety goggles. As with most junk I acquire, I had a story with this find. (Cue the back-in-time music)

A couple years ago, I was on vacation in a local beach town. Much of my extended family were there too, including my brother. One day after a few vacation cocktails, my brother and I felt the overwhelming need to ride our bikes around town. Zipping through the back alleys in this beach town, we came across an old garage that was being torn down. I immediately hit the bendix brakes, as did my bro. Out in the demolition rubble were buckets of old hardware that were clearly from an old timer's shop workbench. Much of trash contained old nails, screws and other old garage shop stuff. Even after imbibing in a few vacation cocktails, my well trained eye spotted an old pair of welder's safety goggles in the trash! These things had the old metal protective side covers, a leather nose bridge and thin pre-nylon age head strap...very old school! So I fished the goggles from the trash and with the encouragement of my brother and the aforementioned cocktails, I thought it would be a pretty good idea to wear the dorky goggles as we continued on our bike ride. (For the record, it takes little prodding...I would have worn them with or without the cocktails!) I am certain I looked pretty goofy, grinning from ear to ear and sporting my vintage welder's goggles. But I didn't care-I was on vacation! For the rest of the bike ride, my brother had some good laughs and I didn't get any bugs in my eyes!

Once home from vacation, I didn't have much use for an old pair of welder's goggles. That is until I learned about the Steampunk craze! I retrieved the old goggles from the garage and took some photos of them. I didn't bother cleaning them up, figuring the old dust and dirt gave them a nice aged character. After the photo shoot, the goggles went up for auction on eBay. Lucky for me, goggles seem to be one of the more sought after pieces of Steampunk. Currently, there are about 4000 Steampunk fashion items listed on eBay. Only a few of these items are true vintage goggles like mine. I further upped the ante by hyping the cool leather nose bridge and head strap. It all must have created some steamy interest....my trash-salvaged goggles sold for a $48 dollars! Long live Steampunk!

So thanks to Miss Clamco, Jill and other readers, this Dude has learned a few new tricks too. If you're familiar with any hot collectible genres, please let me know in the comment section below. I need this info before my next vacation bike ride!
Pin It now!
Posted by Dude ! at 2:45 AM