Dear Buyer, Thanks for returning the pound of chuck roast! 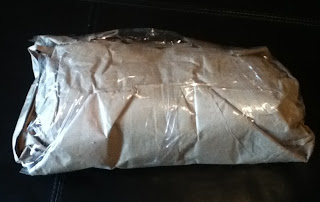 Oh, the trials and tribulations of being an Ebay seller! Occasionally I'll hear from a buyer complaining that I improperly packaged an item for shipping. In most cases, the item didn't get damaged. The buyer just wants to nit-pick, claiming I could have packed the thing a little better.

When I receive these e-mails, I have to fight my urge to respond with a wise-crack. Instead, I bite my tongue and put on my "customer service" hat. Believe me, it's hard to do sometimes. But I look at it this way-although the buyer is being a royal pain, what's the harm in replying in a nice, friendly manner? Even if I think they're dead-wrong, there's really no extra effort on my part in being customer friendly. All it takes is a few keystrokes. Heck, I can even make gagging faces and roll my eyes while typing the friendly response...they'll never know!

It's important to take this approach. Buyers who take the time to write and complain are just a mouse click away from entering negative feedback and low DSR ratings. So even if I think they're off their rocker, my response will usually contain an acknowledgement they were right, along with an apology. It usually goes something like this:

"Sorry to hear you were disappointed in how the item was packed. You're right, I am definitely going to be a little more careful when packing the (______) in the future. Thanks for letting me know. I hope you enjoy the (__________.)"

In this scenario the buyer is just looking to be reinforced and told they were right to complain. It's a psychological game your playing with them. Sort of like defusing a ticking time bomb! But your real intent is to simply calm them down so they don't torpedo you with poor eBay ratings. Most of the time this works with a nit-picky buyer. More then once, I've received a response thanking me for getting back to them. They'll even tell me how much really they like the item. When I get a response like that I know the bomb has been defused!

I bring this issue up because while a buyer can complain about poor packing, the seller can't do the same when the situation is reversed. Recently, a buyer returned a beautiful LL Bean shirt claiming it didn't fit him. (This despite the fact that I clearly stated the shirt size and measurements.) Knowing eBay sellers can't win this battle, I told the buyer to return the shirt for a full refund. Several days later I received the above "package" in my mailbox. The seller had tightly rolled up my beautiful LL Bean Shirt like some Persian rug. He then shipped it in brown grocery bag paper! I am lucky the police didn't knock on my door. This suspicious package looked like an illegal drug shipment that came across the Texas border. It also reminded me of a few pounds of ground chuck roast. The type "Sam the Butcher" use to wrap up and hand over the counter to Alice on the Brady Bunch! Inside this brown paper bag, I found my once beautiful LL Bean shirt. It was all wrinkled and crumpled, like something from the bottom of my son's clothes hamper!

Now here's where the double standard comes in. What would a buyer think if they received a shirt packaged like this? Wow, I could see my five-star rating plummet as soon as the wrapper was opened! But even though the buyer did an awful job packing the shirt, did I complain? Nope...I just bit my tongue and gave him his refund. So the guy got his money back and I re-washed, dried and ironed the shirt. I'll eventually re-post the shirt and make my money, but the eBay "double-standard" is frustrating and annoying!

Have you had some rotten "double-standard" sales like my "chuck roast" return? Share your sad story in the comment section below...
Pin It now!
Posted by Dude ! at 3:25 PM