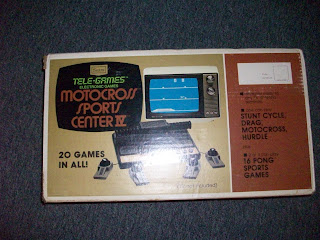 Imagine this scenario. How would you like to pull something out of the back of your closet and turn it int0 big cash dollars? Something you had stored away and pretty much forgot about over time. Maybe as the years pass you considered throwing it away, or selling it for a few bucks at your garage sale. Then you finally pull it out of the closet and wisely decide to sell it on eBay. You end up being way glad that you did, because as the auction progresses you realize you just may have something big on your hands!

That scenario may have happily played out with one lucky eBay seller. While researching vintage gaming systems, I found this listing for an old "Sears Tele-Games Motorcross Sports Center IV. " (Say that five times fast!) Basically, it's a video motocross racing game. You can also play a riveting game of pong on this system. It seems like just another Sears knock-off, but these early sets were made by Atari for Sears back in 1977. It was the dawn of home video gaming-no longer did Mom need to drive Junior to the local Mall to play video games in Spaceport. Junior could now save the quarters and play video games at home! Since kids can be pretty rough on games and toys, few of these systems survived. (I had an early "Tank" game system and pulled the toggle handle right out of the game base!) But while you can still find the original Atari systems at garage sales, this Sears game system is much harder to come by. Check out the seller's excited description: