Don't be puzzled at the garage sales! 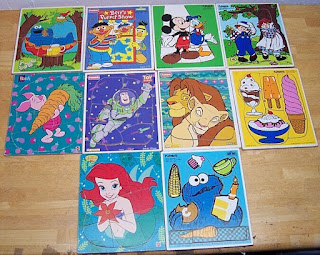 Feeling a little intimidated over the variety of garage sale items you can sell on eBay? It can be overwhelming trying to remember the multitudes of stuff; Coca-Cola, Pyrex, Tupperware, Nike, NorthFace...the list goes on and on! I know from experience it's hard to keep it all straight in your head. But I have an easy one for you to remember...children's puzzles.

Puzzles are easy to find at garage sales and just as easy to sell on eBay. Not just any puzzle though. I am not talking about those cheap cardboard types found in toy aisles from Walmart to Walgreens. Those are worthless on eBay. You want to look for those heavy 12" by 8" wood puzzles. Lucky for you and for me, these puzzles are a fairly common find at garage sales. For some reason, people seem to save their wood puzzles rather then trash or donate them. I am not sure why. Maybe it's a combination of sentimental reasons and their durability. Wood puzzles hold up under rough play and can last a long time. So even after kids outgrow their puzzles, they seem to linger around the house. Eventually however, these heavy puzzles wear out their welcome and Mom hauls them all out to the driveway for the yard sale. Pricing is usually a happy surprise, I typically pay in the range of a quarter to a dollar per puzzle.

When it comes to manufacturers, Playskool and Fisher Price wood puzzles always sell the best on eBay. Naturally, the older...the better. Occasionally, I'll find Playskool puzzles dating all the way back to the 1960's. You can easily identify the age of these puzzles. The year can be found printed on the bottom corner. Most of the older puzzles depict simple themes such as Mother Goose nursery rhymes. The older puzzles also attract a separate niche of collectors willing to pay more.

Buyers also love Disney or Sesame Street themed wood puzzles. Check out the group seen in the photo above. I found these ten puzzles at a garage sale last season. I paid a quarter for each, shelling out a major investment of $2.50! As you can see, all the pieces were intact and in nice condition. I sold them on eBay the exact way I found them-one big lot. Some sellers may disagree with this approach. You'll find on eBay auctions that list only one puzzle at a time. Unless you have a super-rare puzzle that will sell for major bucks, I think this one-puzzle per auction is a waste of time. Big "lots" bring "lots" of bidders, so throw them all in one auction! My lot was a great example of this, selling for a final auction price of $35 dollars! A puzzle profit of $32.50!

However, I do have some words of caution before you sell. Wood Puzzles are heavy. If you're not careful, postage for these doorstops can go sky-high! To keep your shipping costs at a reasonable price, sell only ten puzzles at a time. Ten standard size puzzles can squeeze inside a USPS Priority Mail medium flat rate box. (It's a tight fit but it can be done.) Shipping costs for the flat rate box is only $11.35. To prevent the box from blowing out due to weight, make sure to wrap a few bands of strong shipping tape around the outside.

So now you know puzzles can be an easy buy and sell. What kind of garage sale stuff have you found to be an easy eBay sale? Send me a postcard, drop me a line, stating point of view!
Pin It now!
Posted by Dude ! at 12:55 AM 8 comments

Vintage Coca Cola Collectibles - It was some kind of sign! Isn't it amazing me what people will practically give away at a yard sale? Particularly stuff that even the average "Joe" should know is valuable. Take this old Coke sign for example. If you lived in a cave for a few years, you might still realize this sign could be worth a few bucks, right? Coke is one of the most collectible products in the world. Despite this, I guess some folks don't always get the memo. Check out how I scored this sign...

About a year ago, I was out on my very first garage sale stop of the morning. As I pulled up to the house, I took note of a lot of interesting "man cave" stuff in the front yard. Included in the guy stuff was this enamel Coca-Cola sign, which was just laying in the grass. It was a classic Coke sign, measuring four feet long and a over a foot wide. Jumping out of my truck, I zoned right in on the sign and grabbed it! My first instinct told me it could be a reproduction. I figured there was no way I found a classic Coke sign this easily! But after some close examination, I started to believe it was, as the old commercial said; "the real thing." It had some age to it, and there were some small serial numbers in the bottom corner.

At this point, you may be wondering why I didn't just ask the seller if the sign was real? While that seems like the obvious thing to do, I don't like asking that question. Asking a seller if an item is genuine, can be tantamount to telling him to price it way-high! Garage sale picking is like a game of poker-you never show your cards! In fact, when asking for a price, you should act like you're practically bored with the item. It's as if you're doing the seller a hugemongous favor by taking the piece of junk off their hands! When the seller sees you're not getting all excited over his item, there's less of a chance he'll overprice it.

Putting on my Lady Ga-Ga poker face, I looked over to the seller. He was still busy bringing even more stuff out of his garage. Finally getting his attention, I asked what he wanted for his Coke sign and braced for his response. He gave me a quick glance and said, "Give me twenty for it." I was a little shocked! I thought even if the sign was a reproduction, twenty bucks was still a good deal! Knowing a good price when it's lobbed to me, I quickly peeled off a twenty dollar bill and scooted off with my latest, greatest find!

After I arrived back to the Moneyinthegarage studios, I did some internet searches and verified the Coke sign was authentic. It harkened back to the late Fifties-a perfect vintage era. Now it was time to make some money! On any given day you'll find thousands of Coca-Cola signs listed on eBay. Many sellers ask big money for their signs with a fixed price listing. These same signs will just sit on eBay forever, due to the high price. I don't like to go this route. My philosophy is to get things sold quick! To do this, I like a good, old fashion auction. In an auction, the market determines the final sale price. Keeping with my free market philosophy, I listed the old Cole sign at a below-market price of only $50 dollars.

Once the auction started it became obvious people like their Coca-Cola. My sign saw immediate bids and watchers. (That's why auctions are cool. It's like playing the state lottery-everyone thinks they have a chance to win!) For the entire seven day run, the Coke sign ticked steadily northbound. On the seventh day it rested........at $168 dollars! A pretty good haul for only a twenty dollar investment!

My Coke auction did great. But while I like the auction format, other folks favor fixed pricing. What do you prefer?
Pin It now!
Posted by Dude ! at 1:01 AM 4 comments

Another eBay one day free listing has been announced. I just received this in my mailbox tonight:

I find these freebies are a good opportunity to try to sell some of those stinkers that closed without bids. I'll tweak these auctions, lowering the price, shipping costs or both.

Here's another "Dude" tip that works great during the eBay freebie special. If you find you are pressed for time tomorrow and can't sit down to create listings for new items, then just post all your old stinker auctions. When you have some time over the weekend, completely edit them into a new auction for a new item. Even if a day or two has passed, you'll still created a free five day auction for a new listing! It's worked well for me, hopefully you'll do well too!

What do you think of these eBay freebie specials? Leave a comment below....
Pin It now!
Posted by Dude ! at 5:48 PM 5 comments 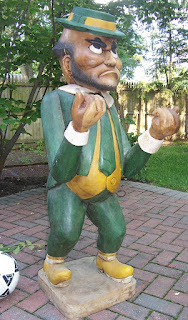