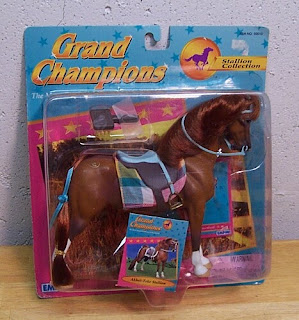 Not long ago, I stopped by my local St Vincent thrift store on a Saturday morning. I've been going there for years and usually find something good every few visits. Not a great track record, but with no Saturday garage sales it's any port in the storm, right? The store is undergoing a huge renovation. The back and side walls are being blown out, making it much bigger and roomier. Judging from the amount of shoppers usually in the store, the construction loan should be paid off in no time at all! On this particular Saturday, I made a small purchase to help pay down the building loan. It turned out to be a worthwhile contribution for me!

With all the construction going on, this store is a crowded adventure. I maneuvered through the tight rows of racks, heading for a quick look in the children's section. It's located in the back of the store with all the kid's clothes and toys mashed together in the same small space. Looking down on the floor, I spotted a toy horse in the original package. This horsey was just sitting on the floor, destined for some little kid to accidentally boot it or worse, step on it! I rescued the toy from it's doomed fate on the floor and gave it a good look over. While the price tag was only four bucks, I wasn't overly impressed with the toy. So I placed it safely on a shelf and walked away. After a few more minutes of looking around the crowded store, I wisely circled back to re-consider the horse toy.

Toy horses are fairly common at garage sales and thrift stores. Many are generic cheapies, as easy to find as a McDonalds happy meal toy. But you can't be too quick to judge when considering a toy horse. There's a whole group of manufactures who's equestrian toys are seriously collectible. Although I am aware of this high-end horse market, I still had no idea if my find was any good. Flipping the package over and over in my hands, I wondered to myself, "Is it a cheapie or a keepie?" I began to evaluate the total package looking for clues. Finding the manufacturer's date, I discovered the horse was nearly 15 years old. An older toy still in the package is always a good sign! I then reached for my cell phone to look up the horse on eBay. I typed in the manufacturer's name (Empire) and the toy's title exactly as it appeared on the package. My search turned up a bunch of Empire toy horses, but nothing identical to mine. This fruitless eBay search is a common dilemma. If you come across this problem here are some "Dude" theories developed over time:

Dude's Theory # 1: The item can't be found on eBay because it's complete junk and has no value.

or
Dude's Theory #2: The item can't be found on eBay because it's a rare collectible and few are available for sale.

Obviously, I was hoping my toy horse fell under the second theory. With a price tag of only four dollars, I decided it was worth betting it was a rare find. I did have one concern about the toy however. Apparently, the package had been opened and resealed. I found a tell-tale piece of scotch tape and a staple strategically placed to re- seal the package. Not a promising sign, since a toy that's been opened is less valuable. But I decided to overlook this little problem. Let's face it, taking chances on thrift store finds is part of the fun!

I posted the Empire horse with a starting auction price of $9.99. In my description I made it clear the package had been resealed withe tape and a staple. Shortly after posting the toy horse, I received the below e-mail from a collector in England.

Hi there,
I've been after this particular Grand Champion for as long as I can remember - what a fantastic find! I was wondering if you would be happy to ship to the UK, and if so, how much postage would cost?

The buyer's reference to my "fantastic find" told me I had something special. I told her I would definitely sell overseas and she immediately entered her bid. I was now off to the races! Adding to auction adrenaline, I continued to receive other e-mails from overseas buyers asking for international shipping. Naturally, I said yes to all of them! As any good auction house knows, the more bidders you have in the game-the higher the price will go!

As my little horsey galloped down the final stretch of the auction, it was clear this little guy was very collectible. During the final seconds of the auction the price kept rising in multi-dollar increments! My horse blew through the auction finish line at an incredible $76 dollars! Considering I originally thought it was just a common toy horse, it did pretty darn good! (The horse was purchased by an eager domestic buyer, saving me the trouble of international shipping.)

How about you? Have you ever found something that seemed "common" but sold for great money? Tell us about in in the comment section below, or send me a picture and story at moneyinthegarage.me@com!
Pin It now!
Posted by Dude ! at 1:32 AM