Like most college kids, my daughter's room is a tad messy. Clothes, shoes, sports gear are strewn all over the room like a small tornado ripped through the door and went out the window. To address this ongoing problem, Mrs. Dude has been looking for a compatible piece of furniture to house the constant stream of clothes that accumulate in Princess's room. My rather lazy idea was just wait until Fall when daughter would take some of the clothes back to her college dorm apartment. Admittedly a short term fix, but at least it would get the clothes out of the house. Not exactly biting on the idea, Mrs. Dude decided what was really needed was more storage. Naturally, I suggested Craigslist. Like the earlier deal I made on my Son's Ikea desk, I knew we would be able to find a nice piece of furniture to solve daughter's storage problem. That was all the encouragement Mrs. Dude's needed....the search was on!

When Mrs. Dude gets the "fever" to buy something she's much like a locomotive coming down the tracks...you can't stop her so just get out of the way or you're gonna get hurt! Mrs. Dude began a relentless search, scouring the used furniture listings on a daily basis. Occasionally she would send me a link to make me feel I was a part of the search party. After about a week of looking, I couldn't help but notice there's a lot of nasty looking furniture for sale on CL. Most popular now are the classic Nineties era TV cabinets. Who can forget those hulking monsters that accommodated the big tube televisions everyone owned prior to the dawn of the plasma? Fewer people have tube televisions nowadays, so unless you can fit a fish aquarium inside those furniture pieces, they're pretty much obsolete. I owned one too and believe me, if you are trying to get rid of one you may have to post it under the  "free" listings. Someone might haul it away for firewood!

Mrs. Dude diligently weeded through all those TV cabinet listings hoping to find the perfect storage unit for daughter. After a few weeks had past she finally thought she'd struck gold, finding a huge white dresser with two drawers on the bottom and cabinet doors on top. The seller wanted $150 for it and insisted she would not come down any lower. I took one look at the photo and seller's price and nixed the idea. If there's one thing I've learned from wheeling and dealing on Craigslist it's this...everything is negotiable. From baby strollers to bikes and stuff in between, I've been beaten down by buyers on price. So when it comes time for me to buy, I expect to be able to do some negotiating too. Since the seller was dug in on her price, we decided to pass on the piece and moved on. 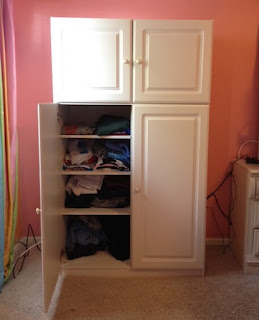 Fortunately, we didn't have to wait long. A few days later Mrs. Dude found this nice big storage unit for sale. The seller was just ten minutes from our house and surprise, surprise...asking only $75. That was half the price of the previous two drawer unit! Liking the price and it's proximity, I told Mrs. Dude to hop in my truck and we would drive over to take a look. She gladly hopped in the passenger side and we were on our way. It's a rare occasion when Mrs. Dude rides in my truck with me in "Jackie and Diane" style, so I knew this cabinet was clearly a big deal to her! Arriving at the seller's house, we were escorted inside their daughter's equally messy bedroom. There we found the cabinet, tightly packed in the corner of the small room. The mom hadn't attached the two-door cabinet that went on top, but still had all the pieces for assembly. She further told me it was a Sauder furniture kit. Doing some Internet research later, I found that similar cabinets sell in the range of $200 or more. Things were looking pretty good for my daughter's storage problem!

The mom was a nice lady, but she didn't have a chance with me. Always trying to find a new way to impress Mrs. Dude, I began working my negotiating skills on the poor unsuspecting women. I began with the usual rubbing of my chin while pondering. I followed this with a comment on how huge the cabinet was, making it really, really hard to move. I added that it was soooo big that I wasn't even sure if it could fit in our daughter's room. Then I hit her with my final deal-closer. Scratching my head as if I didn't really want the cabinet, I told the lady I would take "chance" on it for fifty dollars. I am not sure the mom bought my smoke and mirrors, but she didn't take long to think about it. Possibly looking to just get the thing out of her kid's bedroom, she gave me a subdued "okay".

Mrs. Dude was happy! She paid the lady her fifty and with the husband's help, we loaded the cabinet in the back of my truck. The mom also retrieved the top cabinet pieces which included two side pieces, a top board and hardware. The only thing missing was the back board. As we left, the mom told me she would look around her packed garage for the missing piece and call me if she found it. On the short drive home, Mrs. Dude felt inclined to advise me how to drive my truck-commanding when to slow down at various turns so the cabinet wouldn't topple out the side. It was quite an enjoyable ride home. I hadn't been sternly counseled like that since my high school driver's ed teacher yelled at me for blowing a stop sign! 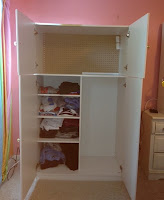 Probably due to my wife's helpful driving lessons, the cabinet made it safely home. With my son's help, we hauled it up into daughter's room. I never heard from the mom on that missing back piece. So instead, I made a trip to the local hardware store and fashioned a $7.00 piece of pegboard to the backside of the top cabinet. As I screwed it into the back of the cabinet, I explained to my daughter how the pegboard would serve two functions. It would brace up the top cabinet, while also providing some nice air flow inside. While I thought it was a pretty sweet piece of carpentry work, daughter did not seem to be all that impressed with my mad skills!

With the top half assembly completed, we moved the big monster into place.  The final product looked awesome! Princess now has one more place to store her voluminous amounts of clothes. (I am sure it will be overflowing in no time.) More importantly it proves once again if you need a good piece of furniture...don't pay retail! Just about anything you need will eventually show up on Craigslist for the right price.

Have you scored any awesome stuff on Craigslist? Everyone loves a good deal, so send me your story and a photo if you have one to: Moneyinthegarage@me.com
Pin It now!
Posted by Dude ! at 5:21 PM