Back to school with a Pearl snare drum

Making money flipping a garage sale find can be fun! It's even better when your buyer is just as excited about your find too. Case in point, about four weeks ago I happened upon a garage sale not far from my house. As I pulled up, it looked like a loser to me. There were a lot of new fabrics, curtains and similar stuff. From the seller's garage sale description, I learned she had an "on-line" store. (Most likely eBay). She had recently closed her business and was liquidating everything via her yard sale. Since I am not into fabrics and curtains, I figured I'd take a quick look and get on my way.

Glancing around the merchandise, my low expectations were confirmed and I started to head back down the driveway. I slowed down however when I spotted a black carry-on bag underneath the table. I recognized it was a bag for a musical instrument. Kneeling down to unzipper the bag, I discovered a bright, shiny snare drum inside. School band season immediately jumped to mind! Having been through the middle school band years with my own kids, I knew these instruments are expensive. I also knew that with the new school year only weeks away, parents would soon be scrambling to buy their child an instrument. 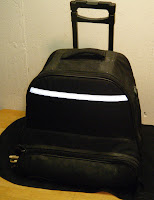 Excited that I actually found something good amidst all the boring fabrics, I asked the seller how much she wanted for the drum? The woman was not a morning person. Her eyes were only half open and she seemed mildly annoyed that I was making her think so early in the morning. She glanced over at me and mumbled, "I dunno... $30 dollars?" It seemed her response was more a question then a definitive statement, so I came back with a counter offer of twenty dollars. Probably thinking she was only dreaming, she groggily agreed. I quickly paid her before she could wake up and realize she'd just given away a $150 snare drum kit for a twenty dollar bill! My fast escape was aided by the bag's convenient telescopic handle. I popped it open and quickly rolled the drum down the driveway to my truck.

I later learned my twenty dollar find was a 14" inch "Pearl" snare drum kit. In addition to the drum, the bag contained a chrome plated stand, drum sticks and a practice pad. The drum itself was near perfect with almost no signs of use on the skin. The chrome plated drum stand was shiny and looked like new. Naturally, I bragged about all this in my Craigslist ad. I also mentioned  that Pearl snare drum kits retail for $150 in many music stores. Initially, I listed the drum for $125. But after a few days with no serious interest, I dropped the price to a hundred dollars. Shortly thereafter, I received several inquiries, including a lady willing to drive over two hours to pick it up. Unfortunately, I guess her spirit was willing, but her car weak because she never showed up. I later received a text from her blaming her no-show on car problems. A typical Craigslist "almost" buyer. 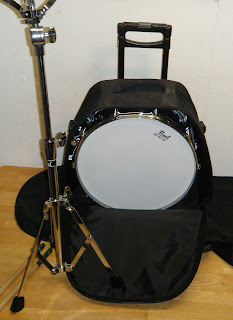 Fortunately another Mom contacted me the very next day. She did show up-with her middle school son in tow. This kid cracked me up. He was wearing a "rock n roll" t-shirt and grinning from ear to ear. He even greeted me with a  friendly, "How are you?" which always impresses me. I told him I was just fine, then showed him and his mom the Pearl snare drum. I could see right away that mother and son both liked it. Opening up the bag, I asked the future drummer, "Nice right?" He gave me a enthusiastic "Yeah!" For fun I added, "The only downside is you'll have to practice every day!" His mom answered for him saying, "Oh, he's okay with that. When he's famous you can  brag you sold him his first drum!" I agreed and told the budding "Ringo" that maybe I should get his autograph right now! At that, I snapped open the telescopic handle in dramatic fashion and told the middle schooler to take his kit for a spin. He proceeded to carefully walk the bag around my driveway like a kid with a pull toy! His Mom smiled approvingly, then handed over five neatly folded twenty dollar bills to me. As his mom packed the kit into the back of her SUV,  the young fella continued to grin like Alice's Cheshire cat. As they drove away, I was happy the kid ended up with my snare drum. Of course, the $100 in my pocket made me feel pretty good too!

Yet another great ending to an awesome garage sale find. I made an impressive $80 dollars, mom got a good deal and most importantly, the kid rolled away with the snare drum of his dreams. A win-win for all involved!

Have you scored any musical instruments? If so, now's the time to sell them. Share your story below.....