Last week I was struck with the sudden urge to improve the shipping department at Money in the Garage studios. In a nutshell, I use the same table when photographing merchandise and wrapping packages to ship. This can be a real pain, particularly when I have to constantly clear the table of shipping tape and packing material in order to photograph items. Deciding it was time to get more efficient, I searched Craigslist for a table I could use exclusively for wrapping packages. Within minutes, I found a sturdy looking table that could fit the bill. But being a seasoned Craigslist seller myself, I had to chuckle at the listing's lame photograph. It looked like the seller had put zero effort in photographing the table. In fact, the photo had all the charm of a police mug shot. But despite the ugly photo, the table looked like it would suit my needs for a wrapping table. The seller wanted $35 for the table and four mismatched chairs. I e-mailed her, saying I was interested in the table only. After exchanging a few more e-mails, I headed to the seller's house to check it out.

It was dark out when I arrived at the young couple's house. The husband met me at the front door and I followed him into their second floor condo. As I reached the top of the steps, I was greeted by a funny little kid who seemed to be very entertained by my sudden presence in his home. The little guy asked me who I was? For laughs, I shrugged my shoulders and apologized for not being Santa Claus. As the kid continued to grin at me, I assured him that the big guy would actually be at his house in five months! While the youngster continued to badger his mom about me, I began looking over the table.

The seller explained that her father had built the table by hand. Shaking the table, I could tell her father did a quality job. There was very little shaking and looseness you sometimes find with old tables. Although I appreciated her father's labor of love, I explained that I was only looking for a table to wrap packages on. This was my way of telling her I wasn't going to spend much money for something destined to be a work table. After a little more shaking and tapping of wood, I offered $20 for the table. Before the young mom could offer a reply her hubby jumped in saying, "We'll take it." A few minutes later the old table was in the back of my truck and heading home with me.

Stoked about my new wrapping table, I couldn't wait to get it downstairs to the basement. Sonny boy and I each grabbed an end and headed to the stairs. But despite my useful directions, ordering Sonny boy to lift here and push there, we quickly ran into a slight problem. The table was too big for the basement stairwell! Adding to the dilemma, the crafty father who built the table made the legs so sturdy that they couldn't be removed! With the legs unable to be detached, no amount of pushing and pulling was going to squeeze the big table down the stairs. Faced with this roadblock, we retreated to the living room and dropped the heavy table in the center of the floor. Knowing Mrs. Dude's was not looking for a new addition to her favorite room, I hastily came up with a new plan. I would re-sell the table!

Regrouping, I now focused on my new goal of selling the table I'd just bought! The day after our stairwell fiasco, sonny boy and I lugged the table into the backyard for some picture taking. In my view, the table had all the markings of a Pottery Barn table. I visualized how it would look in the Pottery Barn catalogue with flowers and a bowl of fruit or vegetables artfully placed in the center. Fortunately for me, Mrs. Dude just happen to have a vase of sunflowers on her kitchen counter. I grabbed the flowers, along with a bowl containing our (delicious) home grown summer tomatoes. As I headed back outside, Mrs. Dude warned me to be careful with the bowl....it actually was from Pottery Barn! (Not sure how Mrs. Dude came across a Pottery Barn bowl....that's an investigation for a later time.)

Positioning the table outside in natural light was the first step towards a great photograph. Adding the bowl full of tomatoes and sun flowers on the center of the table was the cherry on top. The flowers and fruit looked great against the table's dark wood grain. With those stylish flairs, I'd achieved the "Pottery Barn" look and instantly added value to the table!

After taking a bunch of photos, I posted my "Pottery Barn Style" table on Craigslist. As discussed in previous blogs, the Pottery Barn name is pure gold-both on eBay and Craigslist. Knowing this, I made ample use of  "Pottery Barn" in my title and description. The listing turned out pretty good! Check it out.... 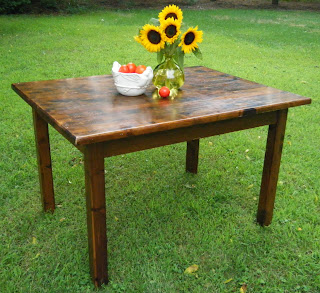 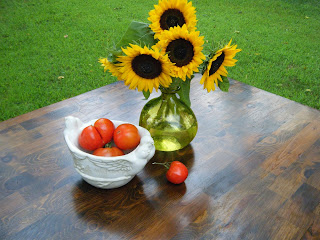 Take a look at this beautiful all wood farm table. This solid table would look right at home in the Pottery Barn catalog. Measures 48" by 35"... Not too big-not too small. Very solid with substantial legs. A few dings here or there but that gives it character. The only reason it's for sale is because I can't fit it through my stairwell! My loss is your gain !

I am not sure what it was...the flowers, tomatoes or just the whole package-but the table sold fast. The very next day, a buyer paid me the asking price of $75 dollars! That was a profit of $55 bucks in the span of 48 hours. This was the very same table that languished on CL with no takers only days before....at half the price I was asking!

This table flip proves that taking time to stage and add some creativity to a listing will pay you back every time! The original seller's photo and description were so bad, she ended up settling for $20 bucks just to get rid of it! I took the time to stage some nice shots and write a winning description and earned $55 bucks for the extra effort. Be creative and you'll be rewarded!

How have you done lately? Let us know in the comment section below....Dude!