Ever hear the expression, "Pay it forward?" Basically, it means to do a good deed for another person. Then that person, in turn, does a good deed for the next person down the line. A few days ago, I paid it forward to a fellow yard sale picker. Instead of keeping a hot yard sale lead for myself, I passed it along to a fellow picker. The lead should turn into an awesome flip for the guy. I got to be honest though, my gesture wasn't totally altruistic. The guy had just bought two rusty old stools from me! So he paid me... then I paid it forward! Confusing, but here's the story:

A few Saturdays ago, I was wrapping up the garage sales for the day when I spotted an unexpected sale on the way home. The sale hadn't been advertised on Craigslist, so this almost always means less buyers and more stuff! I was feeling burned out from the long morning and actually debated whether to stop. Usually I lean on the rationalization that arriving at a garage sale late in the morning means the good stuff is already gone. But after finding so many late morning scores in the past, how could I not stop? So I stopped and guess what happened? Yep....SCORE!

Pulling up to the house, I immediately felt a good vibe. The sale was being run by an old timer. This always increases the odds of finding old, valuable stuff. This theory proved true again, when I found two vintage industrial metal stools. Old industrial furniture are hot sellers on eBay. Prices can go sky-high, but most come in at around fifty to a hundred dollars depending on the piece. The two stools I found met all the major criteria-very sturdy metal construction with just the right amount of patina to give them "character." The History Channel's American Pickers show often spotlights industrial furniture. American Picker's Mike Wolfe is completely obsessed with the stuff, buying anything from old factory shelves to light fixtures, chairs and stools. Basically, anything rusty or gritty that came out of an old factory or warehouse. One of the reasons industrial furniture is so popular is it represents a time when America was the undisputed manufacturing powerhouse of the world. A time when most things bought in this country were proudly stamped, "Made in the USA."

The metal stools I found were clearly made in the USA. They said so right under the seat! Grabbing one in each hand, I walked over to the old timer to see about a price. Unfortunately, he was engrossed in a conversation with a neighbor. I don't know about you, but when sellers get wrapped up in conversations with neighbor, friends or buyers, it can be an annoying situation. Should you patiently wait until they're done yapping, or just jump in and interrupt? Sometimes interrupting can be your only option, otherwise the jib-jabbing can drag on forever!

In the case of the old timer, I decided to quietly wait until he was done talking with his neighbor. The conversation mercifully ended after a few more minutes. Turning his attention towards me, I asked him what he wanted for the two stools? He grinned and gave me the old, "Waddya gimme for em?" Now I have to admit, at this point I was a little cranky. It had been a long, hot day and I had just waited patiently while the old fella yapped it up with his next door neighbor. Feeling a little sour, I low balled him, offering just five bucks for the pair. To my surprise, he smiled at me and said okay. Suddenly, I was feeling much better! After paying him, he laid out the back story on the stools. They dated back to the 1940's and were from an old firehouse. I was pretty happy with this last minute find. Not only did I score two vintage industrial stools, but the firehouse story made them even cooler!


The great thing about flipping old industrial finds is you don't necessarily have to clean them up. The grittier and "sweatier" they are, the better. When it comes to this stuff,  the old Billy Joel song fits perfectly..." I love you just the way you are!" After some light dusting, I sat the stools in front of my garage doors and photographed them.  Here's how they looked on my Craigslist ad: 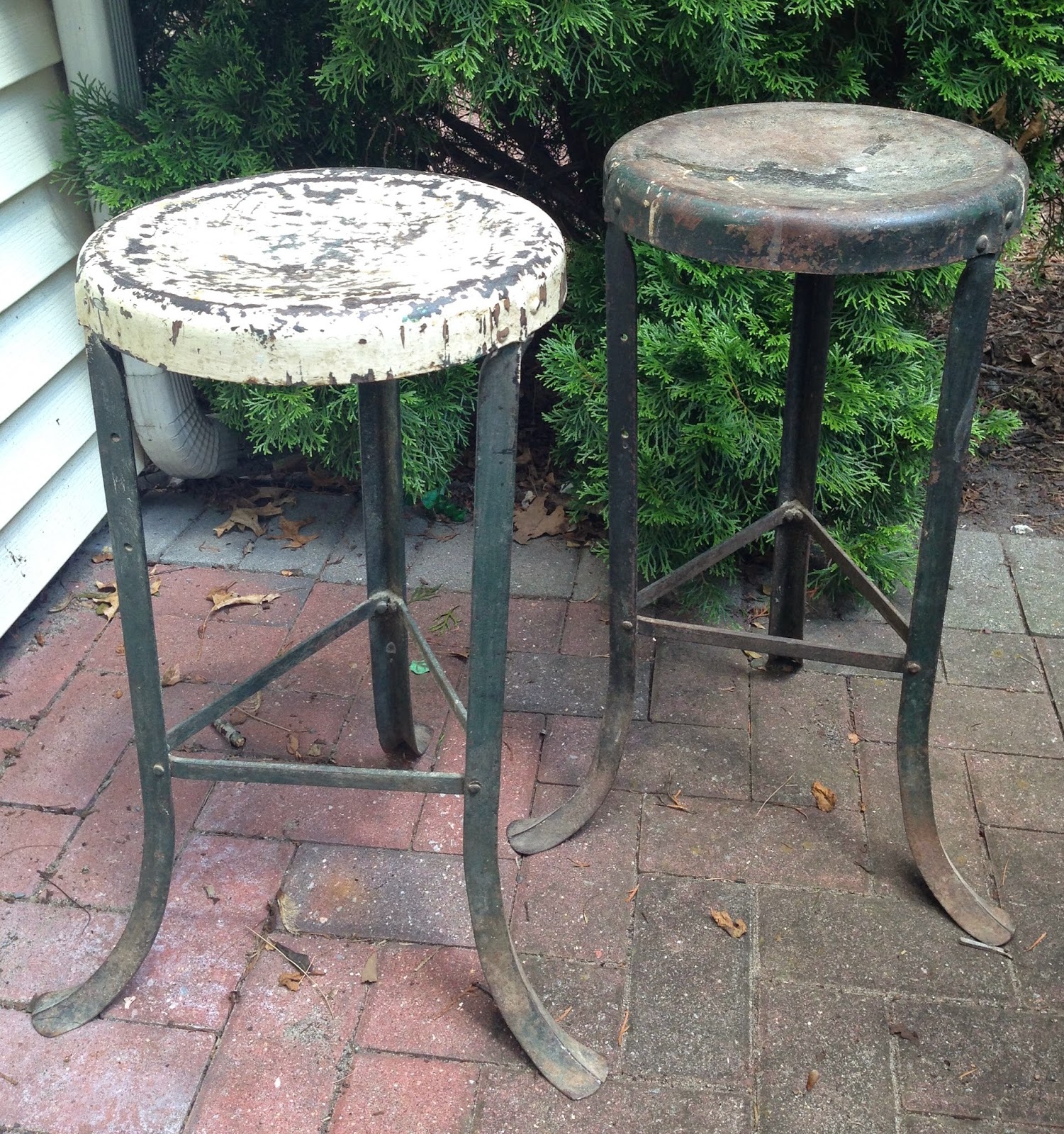 Great looking pair of vintage Toledo-style industrial metal stools. These stools are two feet high. The concave seats measure one foot across. (Very comfortable to sit in.) I acquired these from an old timer who told me they came out of a local firehouse. He estimated they date back to the 1940's or thereabouts. Nice industrial detail to these, check out the angled legs and fluted feet. They don't make them like this anymore!

Looks like a winner, right? Well, yes...and no. As much as I admired these two stools, the buyers were not exactly beating my door down. One thing I learned is Industrial is hot in many upscale, big cities. But if you don't live near those cities, then you're not going to get the calls. While I could have posted the stools on eBay, the shipping would have cost me around $80 for each stool. So I stuck with Craigslist and waited for a buyer. After several weeks of posting, then reposting, a buyer came along and offered me $50 for both. I countered with $75, but he wouldn't budge, explaining that after cleaning them up, he planned to re-sell them for $50 each. His explanation seemed legit, so I put up the white flag and told him to come get them. After all, turning five bucks into a fifty bucks ain't so bad!

When the buyer picked up the stools, I realized he was a kindred spirit and a pretty good guy. We began trading garage sale flipping stories. He shared one incredible story about buying a huge lot of old trains for twenty dollars and flipping them for $900! (I am working through a train lot too. Will share that story at a later time.) After trading a few more stories and getting paid, I decided to pay it forward with my new buddy. Knowing that the guy had an interest in industrial, I gave him a lead I'd found on a local Facebook yard sale group. It was an old Industrial cart offered for $30 dollars. He jumped right on the lead, contacting the seller and buying the cart later that day. That evening, I received an e-mail from the guy thanking me. I told him that us yard sale pickers have to stick together! So it worked out pretty well for both of us.