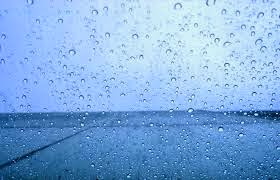 No matter what kind of weather, it's rare for me to stay home on a yard sale Saturday. Other then Winter, when there's no sales to be found, I am always hitting sales each and every Saturday morning. As far as I am concerned, the only legitimate reason to stay home on a Saturday morning might be heavy rains. After all, who holds a yard sale in the rain anyway, right? Well, while most don't, there are a few hardcore sellers who won't let a little rain stop them. Since there's always a few "rain or shine" sales out there, I put on my raincoat and head out. It may seem a little nuts, but after reading this story, you'll see that I am not that crazy to go out in the rain...

Way back on a Saturday morning in early September, I woke up to a light, but steady rain. I don't need the Weather Channel or Internet to get a weather report. I go old school, using my open bedroom window to tell me what I need to know when I wake up. On this particular morning, I could hear the drip-drip-drip from a gutter downspout outside the window. This meant steady rain outside. Groaning for a moment, I wrestled with the tempting idea of skipping the yard sales and going back to sleep. After all, most folks cancel their sales when it rains anyway, right? I tossed and turned, deciding what to do. Heading out could be a total waste of time or maybe, just maybe, there was a great deal waiting to be discovered. As it always does, the notion of finding a great deal won out. I dragged myself out of bed and headed out on a crummy, rainy day that would have kept most folks at home.

Driving down the wet roads, it was obvious the steady rain had scared off the fair-weather yard sale shoppers. It also scared off most of the sellers too! Pulling up to house after house, I was finding the same thing-canceled sales. While a few sellers were considerate enough to post a sign outside announcing their cancellation, most would-be sellers just kept their garage door closed tight. It was as if the yard sale ad they posted on Craigslist meant nothing....the nerve of some folks! The cancellations continued and things were looking bleak, as I drove down the last remaining sale on my map. Dang the luck, they were closed too! But just down the street I spotted a ray of hope. There, in the pouring rain, was a small, soggy cardboard yard sale sign taped to a streetlight pole. It was pointing down a cul-de-sac. The sign read, "Yard Sale-Rain or Shine." Hallelujah...a seller who was bravely holding a yard sale despite the rain!

I had a good feeling about this yard sale. For one, it hadn't been posted in Craigslist. This meant few, if any, buyers would find it. Secondly, I knew exactly who the seller was since I'd been to his house before. He was a bit of an eccentric with some interesting stuff for sale his last go-round. But at this point in the morning, I didn't care what he had to sell-any sale was better then nothing! So I headed down the cul-de-sac hoping to salvage this washout of a day. And boy...did I ever!

Walking up his driveway, the seller greeted me as he moved stuff around in his crowded garage. He was an older gentleman; a tall and lanky guy who liked to talk...a lot! Normally, gabby sellers tend to slow me down, so I try not to encourage any unnecessary chit-chat. However, since I knew there were no other yard sales to be had, I warmed up a little and chatted to the guy as I looked through his stuff. As in his previous yard sale, the guy had a ton old record albums. Nothing I was really interested in, but that didn't slow my buddy down. He wanted to share his opinions on several of the albums in depth with me. I humored him, but  kept looking as he talked. I noticed a bulky stack of boxes in the center of his garage. It was a cloudy day, and combined with the lack of good lighting in his garage, I struggled to make out what was inside the boxes. Leaning into the pile to get a closer look, I realized I had a possible major discovery on my hands. The boxes contained a huge collection of old trains! Not just any trains either, most were "G" scale, which are humongous trains, each measuring 20 inches or more in length. My adrenaline started pumping! Keeping my poker face on, I asked the seller what the story was on all the trains? He explained that his brother recently passed away and he inherited his huge collection of model trains. He then said those magic words a yard sale picker loves to hear, "I just want to get rid of them."

Ding-Ding-Ding! This was not a drill! In fact, it was a dream scenario. I found myself at a yard sale with absolutely no other buyers to compete against, coupled with an awesome train collection the seller wanted to get rid of. All the planets were in alignment! I knew there was only one thing to do. I had to take a stab at buying the entire collection from the guy! I could tell from his demeanor that my new buddy had no emotional attachment to the trains. To him, they were just taking up much needed space in his garage. I asked him what he wanted for the trains? As he poked around the boxes, he responded saying he hadn't really thought about a price. Throwing it right back at me, he asked what I wanted to pay? I countered, telling him I hadn't anticipated buying a huge lot of trains today and that I only had $130 on me. (All true.) I then asked him if $130 would buy the trains? He thought about it for moment, then shook his head yes and said, "Let me help you load them." Emptying my pockets, I handed my new buddy the entire wad of cash I'd taken with me that morning. I then wasted no time stuffing all the boxes and loose trains into Mrs. Dude's car! As I hustled the boxes from garage to car, I worried the guy might change his mind for some reason. But not only did he not change his mind, he scoured the garage to make sure I didn't miss any of the boxes. There were so many boxes and trains that when it was finally all packed up, the only open space in the car was the driver's seat.

I pulled up to my house praying Mrs. Dude wouldn't look out the window. She's very protective of her Rav-4 and would not have been happy at seeing her "baby" packed to the roof with old, dusty boxes and trains. Luckily, I quickly unloaded the train collection into the garage before she noticed. While domestic tranquility was preserved, I still had a lot of work to do. There were plenty of photos to be taken and listings to be posted. I decided to start with something I knew would quickly help me recover my initial investment-a vintage Lionel train bank building. Collectors go wild for these classic vintage tin metal buildings. Most collectors consider them a must-have when assembling a classic model train platform. Posting the bank building on eBay started my train sales off with a bang. The Lionel bank building sold for $100 dollars! With that very first sale, I'd instantly recovered a huge chunk of my $130 investment! I then posted a newer train set that my eBay research showed would also sell for big bucks. It was a small scale version of the Amtraks's Acela passenger train by Bachmann. This auction exceeded my expectations, resulting in a sale price of $182 dollars. With only two sales, I was now $152 in the black on my investment. Using both Craigslist and eBay, I slowly sold off all the train pieces including; locomotive engines, passenger cars, box cars and tracks. Because of the popularity in model train collecting, I had no problem selling most of my pieces for top dollar. It really doesn't matter what brand; Lionel, Bachmann, MTH, American Flyer or Aristo-Craft...model train collectors are extremely passionate about their hobby. Just the other day, I met a model train collector at the local Dunkin Donuts for a sale. He drove 90 minutes, meeting me on a freezing cold winter morning and bought the last train set from the original lot. It was an O scale set made by Aristo-Craft. He must of really liked it. He paid $225 dollars for the set!

You can probably see where all this is going. After many months, I've pretty much sold most of the train pieces from that rainy day find. While there's a few more bucks to be made in some leftover track I still have, I decided it was time add up my total profits. I was surprised what the calculator read. In total, my train score generated just over one thousand dollars in sales. Pretty big number, right? Now you know why every Saturday morning, whether it's rain, snow, sleet or hail...

So don't let a little rain stop you from making a huge score. If it's raining, get your umbrella and head out there. You never know what you're going to find!

If you've scored a great rainy day find, here's your chance to brag about it. Tell us your story in the comment section below....