Happy Holidays to all! I hope everyone had a great Christmas both in celebrating and selling stuff! It was a very good Christmas selling season for me this year. During the months leading up to the holidays, I had a fair amount of items put aside to sell when the holidays hit. It’s hard to say if my “wait and sell" strategy is the best approach, but by the third week of December I completely ran out of Christmas stuff to sell, so no complaints here. Let’s take a look at some of my best flips this holiday season.

Starting off with a vintage Christmas piece, here’s something you don’t find every day; a Christmas “Roto-Wheel" in the original box. I came across this color wheel on my Facebook Yard sale group. The seller was asking five dollars, which I immediately jumped on. Back in the day, these contraptions were placed in front of those classic aluminum Christmas trees to project multi colors onto the tree. Not real high tech stuff, but this was way before fancy LED lighting.  The wheel was a pretty good Facebook find, and while I’d prefer to be flipping the actual aluminum Christmas tree, this was the next best thing. I sold the vintage wheel using an eBay auction. It sold for $37 dollars plus shipping. Not bad for a five dollar investment.

The holiday inflatables continue to do well for me too. For example, I bought this “Biker Santa” at Goodwill paying twenty dollars. I am not a bike expert, but Santa looks like he’s riding on a Harley Davidson motorcycle. Pretty cool stuff. I sold a similar Santa two years earlier for big bucks, so I had a hunch this would do just as well. My new Biker Santa was in great condition. If he was ever used, you could have fooled me. He was very clean, with no nasty outdoor stains that some show after a few years of sitting out in the elements. I posted my latest Santa during Thanksgiving week for a "Buy It Now" price of $125 dollars plus shipping. It sold a few days later! Normally, I would have just wrapped the box in shipping paper and sent it on it's way. However, the buyer requested the box be placed inside another box for extra protection. While I didn’t think the extra box was necessary, the buyer paid over a hundred bucks for Harley Santa, so who am I to argue? I slipped it inside another box and away it went!

I’ve been flipping stuff for a long time and one thing that still gets my juices flowing is finding a vintage holiday blowmold! Case in point, this beautiful Nativity set. This was another score found on Facebook. The complete set cost me fifty bucks! This set was in very good condition and even came with built-in stakes fastened to each piece on the underside. I brought it home, then waited a few months until the holiday season approached. Just after Thanksgiving, I posted the set on Craigslist for $175 dollars. Within just a few days, I found a buyer who negotiated a price of $160 for everything. Just like that, it was out of my garage and I was $110 bucks richer! So great! 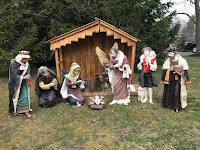 Finally, while on the subject of Nativity scenes, check out this huge set that was given to me for free! You read that right. I paid zero, Nada...as in nothing.  It was given to me by an older gentleman who I’ve known for a while. This old timer did very well in life and had owned an insurance business. He’d recently been working on downsizing his primary residence with plans to a move to a smaller house. Those moving plans did not include this big, beautiful Nativity scene which use to sit on his front yard at Christmas. As you may be able to tell from the photo, it isn’t your average set. The figures were almost life-size, many measuring five feet high of more. Although I offered to pay for the set, the old timer refused to take my money. So after thanking him for his generous gift, I packed the huge set into every square inch of my little truck and brought it home. It was quite a site, with a nearly life-size Joseph buckled in the passenger seat! Because it was so huge, I wanted to get the set sold quickly.  Although it had a few flaws, including some broken pieces, I set the Craigslist price at $200 big ones. Even with some of the pieces cracked or flawed, this was a very good price considering the set sold for over  THOUSAND BUCKS when it was new! I took a few weeks, but I did find a buyer. A Christmas Tree farmer bought the set, paying $180 dollars for use on his farm. A great place for this beautiful set to be displayed!

That’s a few of my holiday flips this year. How’d you do? Share some of your Christmas scores and more in the comment section below. Lastly, Happy New Year to all the readers of MoneyintheGarage.Com. Hope this coming year treats you well!