With the holidays now behind us, this is a good time as any to go over some of my seasonal flips. Overall, I feel sales were strong, although not as good as previous years. But considering the Covid pandemic and the economy, it's easy to see why. I am not complaining though. I still did pretty good considering the situation. Let's take a look at a few of my more successful holiday flips.

My obsession with holiday blow molds continues. Over the course of the yard sale season, I picked up about a dozen plastic figures, paying anywhere from a dollar, to twenty dollars for each one. I just can’t resist them! Since I buy them all year long, they are subsequently stashed in various nooks and crannies around the house.  Incidentally, I found that Noel candles are the easiest to store. I tuck them neatly in the rafters of my attic space until it's time to post them. In my experience, the weekend that follows the Thanksgiving four day weekend seems to be the best time to go “live” with Christmas Blowmolds.  That’s when folks begin decorating their homes for the holidays.  For example, I posted several blowmolds on Craigslist prior to Thanksgiving and didn’t get a single bite. But that all changed once Thansgiving past and I quickly sold several figures in my collection. (I only sell blowmolds on Craiglist to avoid high shipping costs.)    One of the first blowmolds sales of the season was this set featuring a reindeer and a penguin. These
guys were probably made back in the mid-1990’s, so they're not true vintage. However, they meet an important criteria for resale...they’re not made anymore! That’s good enough to bring the buyers out. I forgot what I paid for these guys, but I’d venture to guess it was no more then ten bucks a piece. I posted the pair on Craigslist for $85 dollars just prior to Thanksgiving. They were snapped up the following weekend. I met the buyer at a local convenience store and she gleefully forked over the $85 dollars for the pair. As she loaded them into her car, she told me she lived with her elderly parents and liked to decorate their front yard with lots of Christmas blow molds. With that, she pulled away and the penguin and reindeer were heading for a spot in her front yard. 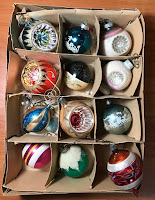 In past holidays, I've stayed away from flipping Christmas tree ornaments. Not that they don’t bring in money, because they do. But rather because I am afraid of them breaking in shipping. Many vintage tree ornaments can be as fragile as eggs. The notion of putting them into the rough and tumble mail stream scared the heck out of me! But last fall I came across a box containing a dozen vintage ornaments. At only a dollar for the entire box, I couldn’t pass it up. Mrs. Dude did some research and advised me that my box of ornaments had the potential to bring in some serious cash. She pointed out further that several of my ornaments had fancy “indents” which seemed to be really popular with buyers. So following her advise, I nervously posted my one dollar investment on eBay with a starting bid of $15. Turns out, Mrs. Dude was onto something. The ornaments topped out at $45 dollars a week later! In order to prevent my shipping nightmare from becoming true, I very carefully packed the ornaments using loads of peanuts and bubble wrap. Although due to Covid delays they took a little longer to reach the buyer, they thankfully arrived at their destination safe and sound. (Good job USPS!) Since we’re on the subject of Mrs. Dude, here's a major score she made at a yard sale. While on this separate yard sale mission, she came across a top of the line train set by MTH Rail King. These sets are very high quality and harken back to the classic Lionel trains from back in the day.  In this case, the set contained a model engine, three passengers cars, track and  a transformer set in the original box. Along with the train set, she also found three special Christmas edition Lionel box cars, each from a different year. She picked up the entire lot for just twenty five dollars! After she brought her scores home, I held off posting them until the Christmas selling season. When the time finally came to post the train finds, I began piecing out the MTH trains and the Lionel box cars in separate auctions. It took the entire month of December, but when the last train piece was finally shipped, my profits added up to $480 dollars for everything. A nice return on a twenty five dollar investment!

Those are a few samples of my holiday flips. Like I said, a pretty good Christmas season considering the current situation out there. So how’d you do this year? Use the comment section below to fill us in.